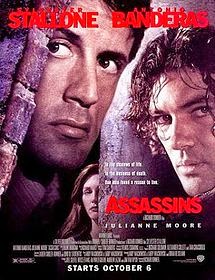 Robert Rath (Sylvester Stallone) is a talented professional killer looking to make one last hit before retiring. When his chance is snatched away from him by the young and ambitious Miguel Bain (Antonio Banderas), he is offered yet another contract - only to find that once again Bain is hunting down the same target.

Assassins is notable for being the first produced film written by Andy and Lana Wachowski, although after a page one rewrite by Brian Helgeland they actually demanded that Warner Bros take their name off the credits (Warner Bros refused, and the WGA sided with the studio). Sadly that is most likely the most notable thing about the film, since for its entire duration it consistently fails to break out from genre conventions and make an impact in its own right. The director Howard Hawks once claimed a good movie featured 'three good scenes, no bad ones'. Assassins scrapes by with two good scenes but a misfire of a climax, rendering it a reasonably entertaining but ultimately forgettable experience.

The film finds Sylvester Stallone in the middle of his first career resurgence, Cliffhanger having boosted his profile and led to him starring in a string of fairly forgettable action films. Of the bunch - which included the likes of The Specialist, Daylight, Demolition Man and Judge Dredd - Assassins is a good bet on being the best of the set. Okay, it's probably between Assassins and Demolition Man, but that's mainly because I have a weird love for Demolition Man. Your mileage may vary. My point is that the mid-1990s were a curiously hollow time for Hollywood action cinema, so Assassins rises to the top simply by having a little more nuance and depth than average.

All of the promise in Assassins is packed into its first half hour. Stallone plays Rath in a deliberately downbeat and meticulous fashion, which contrasts brilliantly with Banderas' flamboyant and jittery antagonist. The prolonged sequence from their first meeting at a graveyard assassination through to their first shootout inside a moving taxi suggests a much more intense and enjoyable action film. Once the film moves onto its core plot, in which Stallone is sent to kill and then inexplicably rescues a computer hacker named Elektra (Julianne Moore, doing the best she can with an underwritten role), the cliches slowly brick up a wall between what the film could have been and what the film actually is. The suspicion grows that plot points occur not because the characters demand it, but because the conventions of the genre do. By the time Rath and Elektra kiss, it's difficult not to throw your hands up and walk away.

There are good bits in Assassins, but bits do not make a movie. It's all directed by Richard Donner, who generally does a stand-up job if he's given a straight-forward screenplay. He wasn't given one here. I'm not sure what happened between the Wachowskis selling their version and Helgeland handing in his, but the result is listless and all over the place.
Posted by Grant at 8:55 AM