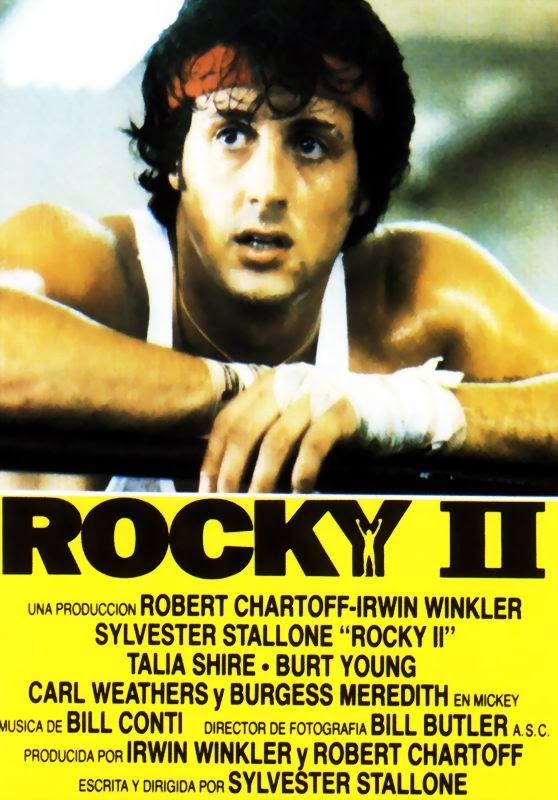 Following his gruelling match against world heavyweight champion Apollo Creed, Rocky Balboa attempts to move on with his life. When at first it seems as if his life has changed for the better, with fame and money rolling in, reality soon sets in and the troubled Rocky - who has promised Adrian he will quit boxing for good - struggles to make ends meet. When Creed challenges Rocky to a rematch, Rocky finds himself torn between the promise he made to Adrian and the one thing in life at which he excels.

When the original Rocky was released in 1976 it was an enormously commercial hit as well as a critically acclaimed award-winner. It took home Academy Awards for Best Picture and Best Director, it transformed Sylvester Stallone into a major film star overnight, and it became a touchstone for American popular culture. All that in mind, and it seems a sequel was inevitable. The problem is: what possible sequel to Rocky can you make? It remains a perfectly self-contained masterpiece, and one that knew when and how to finish. As viewers we don't need to know what happens next. United Artists believed differently, so three years later Rocky was back in the ring in this slightly uneven and redundant sequel.


Of course there's a good argument to be made that all sequels are redundant, but I think that's more true of some films than others. Character-based adventure films seem particularly well suited to multiple instalments, such as those starring Batman, James Bond or Indiana Jones. Other films tell particularly self-contained stories, like Highlander or The Crow, and it seems unimaginable that Hollywood would even attempt to keep such self-contained stories going after they were so definitively concluded. Obviously it's not as if there are just two types of film in this regard - there's a broad continuum - but I do think it's fair to say that Rocky sits closer to the Highlander end of the spectrum than the Dr No end.


I think Sylvester Stallone possibly knew this too, because Rocky II begins in a highly uncertain and wobbly fashion. It unexpectedly kicks off minutes after the climax of Rocky, with both Rocky and Creed on their way to hospital to have their respective injuries treated. From there Stallone (who both wrote and directed this instalment, original director John G. Avildsen having turned it down) runs Rocky through a weird series of soap opera-like events. Rocky asks Adrian to marry him. He gets signed up to promote men's cologne in a belitting and offensive television advertisement. He foolishly spends the money he earned on the fight, and fails to secure solid employment to pay his new mortgage and growing debts. It all feels like a by-the-numbers made-for-television film, and lacks the realistic edge that made the original Rocky so exceptional.

Things suddenly pick up in the film's second half. Apollo Creed's confidence is visibly shaken by his narrow win against Rocky, and he begins campaigning for a rematch. Against Adrian's wishes, Rocky finally re-teams with his manager Mickey Goldmill and the film starts building towards another boxing ring climax. There's a trick to good sequels, which is to give the audience an experience close enough to the original to breed familiarity, but distinctive enough to provide novelty. In its second half Rocky II pulls this off marvellously. We run through the training regime - close to the original, but with a new set of exercises and strategies. We take another run through Philadelphia to the steps of the Museum of Art, only this time it's with Rocky as a local hero surrounded by cheering children.

When we finally reach the climactic rematch, the film really kicks into high gear. It's a very different fight to the one in Rocky. It feels considerably more personal, aggressive and utterly brutal. Stallone shoots the sequence brilliantly in collaboration with cinematographer Bill Butler. It feels like a cliché to write 'you feel every punch', but it is definitely a scene where you wince and flinch on more than one occasion. The film may have stumbled a bit to get to the fight, but once there it's more than worth the effort.

Despite the shortcomings of the screenplay, the returning cast are uniformly great. Stallone and Talia Shire continue developing Rocky and Adrian's relationship; his grief when she almost dies in childbirth is beautifully expressed. Burgess Meredith continues to steal the show as Mickey, particularly in an exceptional early scene where Mickey tests Rocky's diminished eyesight. Burt Young gets to play Pauly in a much more likeable fashion this time around, with less petulant complaints or seedy domestic violence. I was particularly impressed with Carl Weathers, who shows a more vulnerable and brittle side to Creed. It's a more interesting character this time around as a result.

As was the case with the original, the best aspects of the film are in the details. It's in Rocky pausing on his way to the arena to get a blessing from his priest, or in Creed humbly congratulating Rocky in the chaos after the fight. It's not the perfect sequel, in fact it's a staggeringly uneven one, but it makes it across the line in the end and provides an immensely satisfying conclusion. It also opens up the franchise: a sequel to Rocky seemed foolish. A sequel to Rocky II seemed inevitable.
Posted by Grant at 2:32 PM