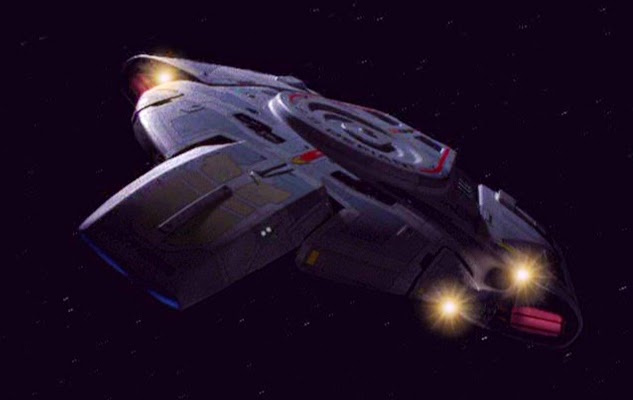 Commander William T. Riker (Jonathan Frakes) visits Deep Space Nine, and a somewhat smitten Major Kira offers to give him a tour of the station's facilities. When he stuns her with a phaser and steals the USS Defiant, it become apparent that it isn't Riker at all, but rather his duplicate clone Thomas. As Thomas directs the Defiant towards Cardassian space, Commander Sisko is forced to help Gul Dukat in stopping him.

There's one big hurdle to jump over with "Defiant", and that's Thomas Riker. If you missed that one episode of Star Trek: The Next Generation two years earlier that introduced and explained him, then you're possibly going to be scratching your head here. Or rolling your eyes. It's a strange trick to pull: going to all the effort of signing up one of the Next Generation stars weeks before the first TNG movie debuts in theatres, then suddenly revealing that you've brought him back to play an almost identical character of whom you may or may not have heard instead.

So let's assume you overcome that little obstacle, or are an ardent enough fan to remember "Second Chances". "Defiant" is actually a wonderful episode. It's tense, dramatic and populated with precisely the kind of nuanced moments of character that make Deep Space Nine so distinct compared to its Trek siblings. It's basically a submarine thriller, with the Defiant hiding among the stars and a net of Cardassian warships slowly trawling across their territory in the hope of finding it before it decimates a colony.

Gul Dukat (Marc Alaimo) is back, more sympathetic to watch than ever. It's a cruel but clever trick to slowly make an audience like such a monstrous individual. He gets one sensational conversation here, as he complains to Sisko that the Defiant incident has made him miss his son's birthday. Sisko, seeing a chance to connect, remarks that he has the same problems raising Jake, and that all either of them can do is hope their sons will look back in the years to come and appreciate the sacrifices their fathers had to make. 'When my son looks back on this day,' replies Dukat, 'the only thing he'll remember is that a Federation officer, on a Federation ship invaded his home, and kept his father away from him on his eleventh birthday, and he won't look back with understanding. He'll look back with hatred, and that's sad.'

Dukat also has his hands full with a developing rift between Cardassia's Central Command and its secret police, the Obsidian Order. Quite what the Order are building in the Orias system is never revealed here, but as is the growing trend in the series, events here will be picked up and continued further down the season.

On the Defiant Thomas Riker leads a Maquis suicide mission to destroy a Cardassian facility on Orias. It's timely to re-introduce the Maquis, since they played a significant role in Season 2 before being sidelined by the Dominion story arc. Given that the debut of Star Trek: Voyager was weeks away at this point, and featured several lead cast members from the Maquis, it's sensible to remind audiences of precisely who they are. His scenes with Major Kira are dramatically strong, although it must be said that his reasons for joining the resistance seem rather under-motivated. Like the Obsidian Order, his story gets put on the shelf at the episode's end to be taken down and continued later. Unlike the Order, however, Thomas' storyline is never continued - either Jonathan Frakes wasn't available, or the writers elected to abandon the arc.

Altogether this is a great suspenseful episode, and a relief from the awful episode before it. It leaves Season 3 with seven good episodes out of nine; a quality ratio of 78%.
Posted by Grant at 10:55 PM