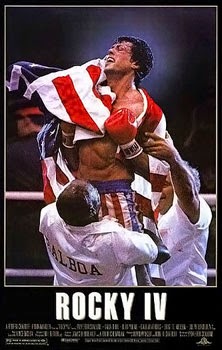 After a long negotiation the Soviet Union is permitted to send its champion amateur boxer, Captain Ivan Drago, to the USA to challenge for the world heavyweight championship. When a friendly match between Drago and former world champion Apollo Creed goes horribly awry, current champion Rocky Balboa gives up his title and travels to Russia in order to take Drago down.

With Rocky IV, Sylvester Stallone completes the franchise's transition from personal drama to fully-fledged Hollywood blockbuster. The subtlety that waned throughout Rocky II and III is completely gone. The title character has been transformed from a fallible underdog into a mythic titan. At 88 minutes it's by far the shortest Rocky film, with its content stripped back so closely to the bone that there's barely a story there to be told.

In many respects it is the ultimate Hollywood movie for the 1980s: extremely glossy, ridiculously over-the-top, stupid to the point of insanity and packed with more montages per hour than pretty much any film in history. It was the most commercially successful Rocky of them all, taking in US$300 million dollars. In the USA at least, the only films to gross more money in 1985 were Back to the Future and Rambo: First Blood Part II - which also starred Sylvester Stallone. That's a hell of a year for an actor - no wonder crew members on Cobra (1986) complained of Stallone's ego at the time.

So why, despite its rampant superficial stupidity and over-the-top USA versus Russia rhetoric, did I really enjoy this movie? For one thing, there is an unexpected wrinkle to the piece that I never appreciated as a child in the 1980s but which seems blatantly obvious as an adult: it doesn't entirely paint the Russians as the villains. This is enormously provocative for the 1980s, when American popular culture constantly used the Russians as one-note cartoon villains. Stallone's own Rambo did as much in the same year. Here, however, he depicts Drago and his management as patriotic and enthused sports professionals looking to excel in a rival nation. They come to the USA in a bold fashion, and they're met with outright aggression and anti-Russian bigotry.

Check out the Creed-Drago fight. Drago is already waiting in the ring when it's hydraulically lifted up to the arena. He looks disoriented and a little overwhelmed. He's greeted by a lavish musical number by James Brown singing "Living in America", flanked by a strutting jingoistic Creed dressed in stars and stripes. It's so ridiculously offensive to him - true to the time in which the film was made, but framed in such a fashion that I can't help but feel Stallone was criticising American culture from within.

Drago is a difficult character to pin down. He barely speaks. When he does it's generally to say something cold and threatening. When he punches Creed into a coma he simply says "if he dies, he dies". Unlike previous boxing antagonists he is aggressively dehumanised right up to the point of the film's climax, where he goes berserk. He rebels against his state trainers screaming "I fight for me!": the good communist turned individualistic aspirant. At the start of that match he tells Rocky "I must break you." Not "will" but "must": there's an argument to be made that Drago is a victim of the state that raised him, and not just a simplistic villain as he's partly represented. It's as if the film can't decide whether to make a socio-political comment or engage in anti-Russian propaganda, so it sort of does both at the same time.

This is where Rocky IV gets almost maddening to watch: there's so much implied around the edges of the film, and a solid half hour that Stallone could have inserted to interrogate these ideas, but instead it's all so stripped back that there's barely a story at all. It's a film told in montage. It begins with a montage. It keeps falling into montage as it goes. At one point Rocky drives off in a rage and we enter a flashback montage that includes the scene out of which he just stormed. At another we run through a training montage, pause for Rocky to reunite with Adrian, and then enter an entirely new training montage. Even the climactic fight in Russia, which is not as well staged as the climax of Rocky III, is mostly shown via montage. I don't think there's been a film before or since that has featured so many montages. It's like a bizarre self-parody.

The last two Rocky sequels followed a broadly similar arc: Rocky is over-confident and falls, and struggles to build himself back up again. This film begins with Rocky at the top of the world, and ends with him helping to end the Cold War. There's no journey or lesson here, and no complexity or depth. Just Americans punching Russians.

I haven't even mentioned my favourite part, which is when Adrian rushes to Russia to join Rocky, leaving their son behind in their house cared for by a talking robot. It's a plot element so bizarre it's difficult to remember you're watching the same franchise that started in Rocky.
Posted by Grant at 9:28 AM