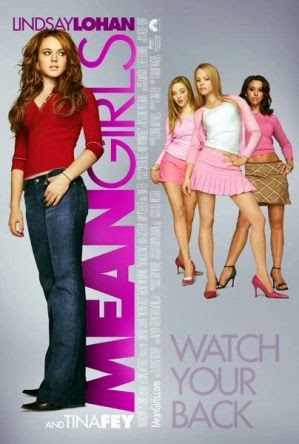 Hollywood makes an enormous quantity of films, and all things being equal most of those films are pretty ordinary. Some genres attract more ordinary films than others, and I think one of the biggest culprits is the high school comedy. They come in waves, and many of them are pretty risible - so much so that it's easy to just avoid the genre entirely and spare oneself from the disappointment. I think this can sometimes be a mistake, however, because it means overlooking some genuinely brilliant movie comedies. Mean Girls, directed by Mark Waters in 2004, is one of those films.

Formerly home-schooled 16 year-old Cady Heron (Lindsay Lohan) enrols for the first time in an American high school. She immediately falls in with new friends Janis and Damian, who warn her to avoid "the Plastics": an exclusive clique of three rich, stylish girls led by the "queen bee" Regina (Rachel McAdams). When Cady is invited to join the Plastics, however, she is convinced by Janis and Damian to dive into their superficial world of shopping, fashion and jealousy in order to destroy them from the inside.

On the surface Mean Girls seems a pretty by-the-numbers sort of teen comedy, but as you watch it a whole range of subtleties and clever social commentary seems to suddenly bubble up from inside. It has an uncharacteristically strong screenplay by Tina Fey, who based in on a non-fiction book about the psychology of high school cliques and bullying. It's that rare beast: a high school movie that actually has something worthwhile to say.

It's also packed to the gills with brilliantly funny moments. Fey's background in sketch comedy is pretty clear, with many of the film's most effective jokes being weird non-sequiturs or single lines of dialogue. It's also slightly odd in that it gives the teachers a fair share of screen time and comedic material: they're usually relegated to the background in this sort of film. Overall it winds up presenting itself at a crossroads between a typical teen movie and a satire of that same kind of movie. Whatever it is, it works.

Lindsay Lohan is an appealing, oddly wholesome lead, but the film's best performances are in the supporting roles. Rachel McAdams is brilliant as Regina, showing off outstanding comic timing and a sharp ability to highlight the character's cruelty. Amanda Seyfried and Lacey Chabert provide strong support as Regina's flunkies, Gretchen and Karen. Tina Fey instils her maths teacher Ms Norbury with genuine depth and warmth. It's Lizzy Kaplan, however, who always makes the biggest impression on me as Janis Ian (named after Saturday Night Live's first-ever musical guest), the scathing, aggressive arts student who takes Cady under her wing and kicks off the plot. Kaplan is one of those actors of whom I became a fan without realising it: I loved her performance here, and then independently loved her in Cloverfield without realising I was watching the same actor.

Mean Girls isn't going to please everybody. It plays pretty firmly within its genre, and as a result no matter of strong character development or well-scripted comedy is going to impress anyone who can't stand watching American teenagers struggle with their love life. For those who do enjoy the odd teen comedy, however, it remains one of the best ones - and one of the more quotable. 10 years on, it remains both gruel and fetch.
Posted by Grant at 9:35 AM