Tsuritama: "The Legend of the Big Fish" 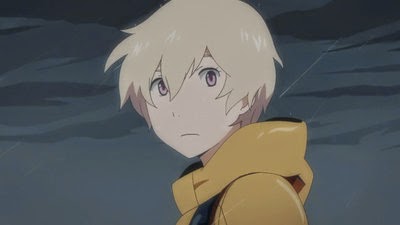 As DUCK prepares to launch a devastating missile strike, Yuki, Natsuke and Akira join Haru to head out into Enoshima harbour and catch JFX once and for all.

It's often quite difficult to criticise the last few episodes of a serialised drama, because even if the creatives involved have done a shoddy job overall it's actually quite hard to stuff up a rousing climax. By the same token, so much of what goes on during a climax can be taken for granted - so when something genuinely impressive is done, it's often quite difficult to take a step back and appreciate just how well staged it is.

This episode is the latter kind of climax. Events and developments from the past 10 episodes all draw together seamlessly as the four fishing enthusiasts head out into the heart of a typhoon to catch a massive alien fish and save the planet Earth.

I've written extensively on how the first half of this series spent an awful lot of time following a fairly predictable formula: Yuki would learn a new fishing technique each episode, in order to catch a different kind of a fish. This penultimate episode now exploits those earlier parts brilliantly, since Yuki has to put all of those techniques together to have a hope of catching JFX. We don't need to waste time learning what each technique is, because the series cleverly seeded them all in as it developed. What seemed to drag a bit in the early stages is now paid off handsomely: the vigorous pace of this episode's second half is only possible because of all the set-up in the weeks before.

The episode is brilliantly directed as well, with a growing number of close-ups ranking up the tension as it goes. JFX itself - a massive dark thing surrounded by thousands of swarming fish - is a genuinely worrisome sight to behold.

At the episode's end, as is the way with things, all hope seems lost. The legendary lure used to catch JFX the last time (some centuries past) is shattered, Haru appears lost, DUCK are about to launch a missile attack, and the boys are sailing headlong into the storm. Will it all end okay? I'm going to guess that it will, but seeing precisely how is all part of the fun.

11 episodes in, nine of them good, and a quality ratio of 82%. Taken one episode at a time this has been a fun series. Taken altogether, and it really is something quite marvellous.
Posted by Grant at 12:17 PM