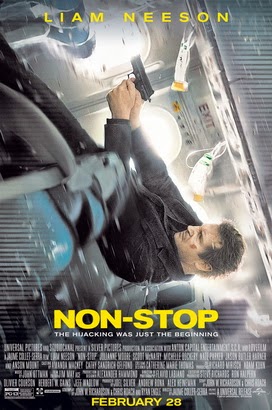 Liam Neeson has become such an integral part of the American action movie landscape in recent years that it's almost worth considering him a cottage industry all on his own. Whether it's in his Taken movies, or The Grey, or Unknown, he has fashioned a lucrative brand for himself as a tall, gruff, brutally violent action star: the 21st century's Arnold Schwarzenegger. Non-Stop is the latest in this seemingly endless conveyor line of interchangeable action movies - and it does genuinely seem endless, with Taken 3 and Run All Night both due before the end of 2015.

Non-Stop sees Neeson play Bill Marks, a tall, gruff and brutally violent United States air marshal who finds himself at the centre of an apparent hostage situation over the mid-Atlantic. The extortionist is somewhere on the plane, threatening to kill a passenger every 20 minutes unless he or she is paid $150 million dollars. On the ground, the authorities mistakenly believe Bill himself is the hostage-taker. As the body count rises and the tension increases, Bill must blah, blah, and so on and so forth.

This isn't a film that's going to win any points for originality. In its defence, it's not trying to be original. This is Neesonland, where everything happens predictably and as seen in 30 other previous action-thrillers, and where the sole reason the audience has turned up at all is to see Neeson make threats in a deep Irish accent and then act upon those threats, beating the crap out of as many people as possible. So on that level alone it's pretty easy to describe Non-Stop as a success. Neeson does his thing and he does it very well. It would be easy to dismiss his work in these films for "slumming it", but on the other hand he's not getting any younger (he was 61 when they shot this) and he can always return to serious drama in the future. He's also being very handsomely paid for this sort of thing, so who can blame him?

The film, which is directed by Jaume Collet-Serra (House of Wax, Unknown), follows a well-worn strategy of casting much better actors than the material deserves. It's something regularly done by both Jerry Bruckheimer and Joel Silver (it's Silver who's producing here), and helps fool an audience into thinking they're watching something much better than they are. So here Neeson is supported by Julianne Moore as a friendly passenger, Linus Roache as the plane's captain, Downtown Abbey's Michelle Dockery as a flight attendant, and so on. This strategy works to an extent, but never to the extent that its producers always think it does.

As the old saying goes: expect what you get and you'll get what you expect. This is a by-the-numbers action vehicle propped up by a slumming cast and packed with about as many genre clichés as it can accommodate. If you're after a simple, forgettable action flick then it may potentially satisfy, but more discerning tastes will find it remarkably unimpressive.
Posted by Grant at 5:12 PM