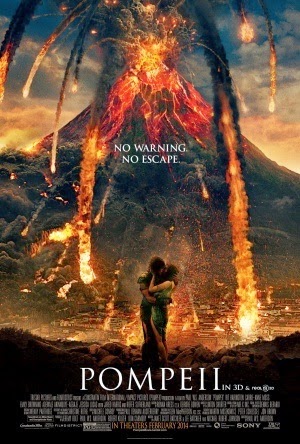 Pompeii, from writer/director Paul W.S. Anderson (Resident Evil, Event Horizon) is the sort of well-intended, amiable B-movie where criticising it too harshly would feel like kicking a puppy. It does what it does, it means well, and it doesn't actively trip over itself in the attempt. Is it historically accurate? Not really. Is it scientifically accurate? Well, no, but if it was then it would have made for one fabulously abrupt climax. It is what it is: a competently directed and immensely derivative riff on Ridley Scott's Gladiator using cheaper actors, significantly less pretense and a bucket-load of naive enthusiasm. Despite looking like a mid-budget Hollywood blockbuster it's actually a German-Canadian co-production. I'm not sure what that demonstrates: that everyone can make generic and dumb disaster movies?

Celtic slave Milo (Kit Harington from Game of Thrones) is transported from Londinium to Pompeii to be a gladiator in that growing city's games. He meets and falls in love with  Cassia (Emily Browning from Suckerpunch), the daughter of the city's ruler (a slumming Jared Harris) who is also the romantic target of the cruel Roman senator Corvus (Keifer Sutherland, also slumming it). As this romantic triangle threatens to reach a climax the nearby volcano Vesuvius erupts, putting everyone in danger.

At its most basic level, Pompeii is crippled by the same flaw that crippled James Cameron's Titanic. It's that you know the disaster is coming, it's that you know almost everybody is going to die when it arrives. It's difficult to engage too much in these sorts of petty romantic struggles when you know a few thousand people are going to be flash-burned in a pyroclastic surge before the film is out. At the end of the day, who cares whether or not Corvus is a murderous asshole when the volcano is about to take out 100 times as many innocent people in a tenth of the running time?

While the audience waits for the inevitable eruption Anderson provides the minimum amount of depth and character development required to claim there's a storyline. Kit Harington and Emily Browning do their best with woefully under-written roles, while Adewale Akinnouye-Agbaje has a visibly enormous amount of fun playing the broadly drawn African gladiator Atticus. As Cassia's parents Jared Harris and Carrie Ann Moss (of The Matrix fame) do their best to look earnest and concerned.

Keifer Sutherland is having a whale of a time as Corvus. He plays the part with a weird sort of camp, sulky demeanour, as if we're actually watching Sutherland play Tim Curry playing Corvus. He even tries out a hilariously unconvincing pseudo-English accent, and performs the entire film with a cruel little smirk. It's not the performance of an actor making bad creative choices, more the behaviour of a star realising that (a) they're in a piece of shit, (b) they're the only real name actor in that piece of shit, and (c) by performing in such an over-the-top manner they can signal to the audience 'please, this is not actually my fault'. I'm glad he goes for it, because he's far and away the most entertaining person here.

When the volcano comes it's initially rather impressive. Then, as the climax develops, and the disaster sequences become more elaborate, it all slides horribly off the rails. It's one of those special movies where you can actually see the exact shot where the film's ambition finally exceeds its production budget. (For the record, it's during a chariot race down Pompeii's main road.)

When this film was first announced I joked to friends that it would be a short movie, since the population of Pompeii were wiped out by a pyroclastic surge of liquified rock and super-heated gas that rolled down Vesuvius at more than 100 kilometres per hour. To Paul Anderson's credit, the surge - while delayed for dramatic reasons - does actually make an appearance. I cheered - that probably doesn't say anything too positive about the depth of the characters who get burned to death.

In the end Pompeii gets away with a lot of its faults because it knows that those faults are there. Critics tend to dismiss these kinds of cheap-and-cheerful B-movies (including Anderson's own successful Resident Evil franchise), but they absolutely have their place. If we watched worthy A-class dramas all the time we'd go spare, or neglect to realise just how good they are. Pompeii is what it is, and does exactly what it says on the tin, and it doesn't seem in the least bit scared of being mocked for it. Mock away - it's a much more enjoyable film that way.
Posted by Grant at 5:01 PM