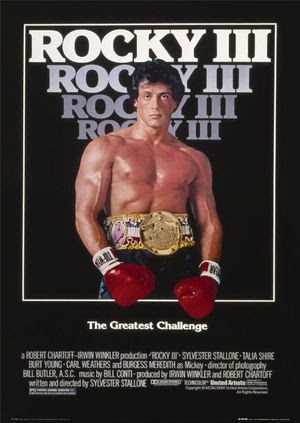 Three years after his historic second bout against Apollo Creed, Rocky Balboa remains world heavyweight boxing champion. Just when he is ready to retire, however, Rocky is challenged by the aggressive up-and-coming boxer Clubber Lang. When tragedy strikes, and Rocky is both defeated and humiliated by Lang, he teams up with an old friend to make one more strike at the title.

Rocky III marks a fairly significant shift for the Rocky franchise from personal drama to Hollywood blockbuster. The characters may have returned, and the story may continue, but the subtleties and human moments that made the original film so good - and which partially redeemed the second - are almost entirely gone. Save for a few key sequences this almost feels like it's about a different character. Audiences at the time didn't seem to mind: Rocky III was the fourth-biggest film of the year, grossing more than US$270 million in cinemas - that's more than either of its predecessors earned.

Whereas Rocky II struggled to find its story, I suspect Rocky III found it very easily: Rocky begins the film at the top of his world, loses almost everything, then makes a stunning comeback to finish the film back where he started. It's all highly formulaic. It also sticks to a Hollywood formula in developing the film's antagonist: Clubber Lang is an out-and-out villain: he's disrespectful, he makes smutty overtures at Rocky's wife Adrian, he gloats and shouts, and prior to his and Rocky's first match shoves trainer Mickey Goldmill so hard the Mickey has a heart attack and dies. One of the reasons that the original Rocky worked so well (and its sequel in some respects) was that Apollo Creed was a likeable antagonist: he was a challenge for Rocky to overcome, but he was a good-hearted, warm human being at the same time. By making Lang a violent and deliberately unlikeable thug, Stallone (working again as writer and director) avoids any complexity or realism. Mr T plays the part well, but it's a shallow and ultimately hollow role to play. He's even rude to Creed, which is I think important, because it helps stop the Rocky films from simply being a franchise about a victorious white man beating up black men. Going over the entire six-film saga, a full two-thirds of Rocky's opponents are black, so it's easy for the thought to occur.

As noted earlier the film marks the last hurrah for Mickey, who suffers a fatal heart attack following a pre-match altercation with Lang. Burgess Meredith was the highlight of the first two films, and his death scene is easily the strongest moment of Rocky III. It's raw, upsetting to watch and deeply personal. It allows for a connection with Rocky that the rest of this film denies us, via lazy clichés and stereotypes. When Apollo Creed convinces Rocky to let him become his new trainer, so that they can take down Lang, the film descends into a chain of by-the-numbers training montages and boring conversations. It's all shot brilliantly, with a much tighter focus on close-ups with a very "in your face" sort of aesthetic, and the actors are all very talented, but they've got nothing to play.

The unintentional homo-eroticism of the film is off the chart. Rocky and Apollo dance and hug in the surf, the camera lingers on their musculature - at one point Apollo even asks Rocky to wear his shorts. I suppose the early 1980s were a different country: irony and self-awareness did not exist in Hollywood back then.

Without any space provided for the characters to develop and show depth, Rocky III is a full 20 minutes shorter than its two predecessors. The film rattles along at a remarkable pace from opening titles to climactic title fight, and it's that fight that makes the film worth watching. These matches keep getting better and better: better choreographed, better shot, better editing - better everything, really. In this case the fight seems genuinely brutal: not simply personal but fuelled by a raging vendetta. It's almost painful just to watch it.

All up I think this is probably the best of the Rocky films in visual terms, but its story is severely lacking and its depth is non-existent. What depth it does reach is found by killing off a beloved character, which feels more than a little lazy in creative terms. It's still a relatively engaging film, but it is sad to see a series of films that began with such heart and personality become slowly stripped back and hollowed out by Hollywood's franchise machine.
Posted by Grant at 9:34 AM