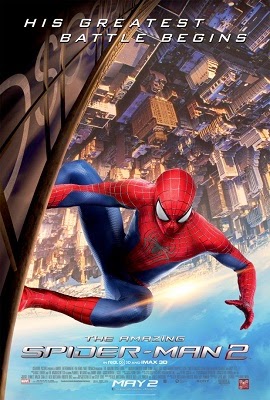 In The Amazing Spider-Man 2 (released with the unnecessary subtitle Rise of Electro in Australia) Peter Parker continues to fight crime while vacillating over his relationship with Gwen Stacy and reuniting with his childhood friend Harry Osborn. When an industrial accident transforms the shy engineer Max Dillon into the super-powered villain Electro, Parker has to stop him before he destroys all of New York.

And so on and so forth. This is actually a difficult movie to describe in a sentence, because the majority of its 142 minutes are devoted to cross-film story arcs and subplots, without a lot of space left over from a strong narrative through-line. The film has a beginning, a middle and an end, but they're all just a little too unfocused and flabby. The story appears to straddle across the film rather than fill it: it picks up on a string of plot threads from 2012's The Amazing Spider-Man and finishes with a bunch of stuff left over for The Amazing Spider-Man 3 in... well, we'll get to that. In between there's a movie that's amiable, and often enjoyable, but far too weakly put together to fully recommend.

Individual elements work fine. The acting, for example, is difficult to fault. Andrew Garfield is a near-perfect Spider-Man, managing to do that 'cheerful dude who can't cut a break' schtick in a way that Tobey Maguire never quite achieved in the original Spider-Man trilogy. Emma Stone is similarly great as love interest Gwen Stacy, and the two actors share a brilliant chemistry. Quite frankly an unrelated Garfield/Stone romantic comedy would be very welcome. The supporting cast are similarly strong, notably Sally Field, Colm Feore and a wonderfully creepy Dane DeHaan as Harry Osborn. Paul Giamatti is weirdly inserted into the film's beginning and end as Alexei Sytsevich, aka the ridiculously unconvincing super-villain the Rhino, and simply feels like yet more foreshadowing for The Amazing Spider-Man 3.

Visually the film looks great, particularly the visual effects used to bring Electro to life. I'm usually not one to marvel at visual effects - they're there to tell a story, so individual pieces of eye candy aren't typically worth mentioning - but the work here looks genuinely impressive. The action sequences are also for the most part well shot and choreographed.

The film staggers quite badly at its climax. In the lead-up to Spider-Man's final fight against Electro I was impressed at how well the film had organically generated multiple villains. This is usually a weak point for superhero movies, but the development of Harry Osborn as the Green Goblin made narrative sense and progressed in a believable manner. Then he actually turns up as the Goblin, and the film becomes remarkably embarrassing. A climactic plot point that should hold enormous weight happens so arbitrarily that its potential is left utterly wasted, and besides it's foreshadowed with such glaring obviousness in an early speech that half the audience was expected it to happen anyway.

With a global gross of US$709 million dollars, The Amazing Spider-Man 2 is the lowest-grossing of Sony's five Spider-Man films, and despite earning the company a solid profit it's led to a lot of soul-searching and indecision within the company. Originally a third film was set for 2016, but then it was delayed to 2018 and its 2016 slot replaced by a Sinister Six spin-off movie. Now reports have leaked out that Sony are debating whether or not to make a third Amazing film at all, in favour of bringing original Spider-Man director Sam Raimi back, or getting Phil Lord and Chris Miller (The Lego Movie) to write and direct an animated Spider-Man, or even licensing the character back to Marvel Studios for them to use in their Marvel Cinematic Universe.

It's a weird fate for a film that's earned more than seven hundred million dollars. That makes it the sixth-highest grossing film of the year, by the way, and the most successful Sony picture by a fairly long margin; the next-most successful Sony film this year was 22 Jump Street, and that earned less than half of what Spider-Man did. So why is Sony suddenly dragging its feet?

I think it's for the same reason that The Amazing Spider-Man 2 feels so weirdly unsatisfying despite its numerous merits. Sam Raimi's first two Spider-Man films were great, particularly the second film. His third film was blindingly awful, and Sony knew it. Their solution? Reboot the whole franchise, with a new Spider-Man living a whole new origin story just 10 years after the last one. It felt unnecessary, and the constant repetition made The Amazing Spider-Man feel hollow and perfunctory as a result (particularly since if you swap the Lizard for Dr Octopus you'd have the plot of Spider-Man 2). The Amazing Spider-Man 2 still suffers from that hollow feeling. This film doesn't exist because someone at Sony had a good Spider-Man story to tell. It exists because if Sony doesn't keep making Spider-Man movies then the screen rights revert to Marvel. At the same time as trying to block Marvel Sony is also now trying to compete with them as well, using this film to kick off an entire sub-genre of Spidey-related feature films including Black Cat and the Sinister Six.

It shouldn't be this difficult. Spider-Man is an engaging character and he looks great on screen. Sony need to stop trying to building a franchise and just concentrate on making good movies. The solution to Spider-Man 3 was not to reboot everything from the ground up. The solution was to make a better film with Spider-Man 4. The solution here is not to delay or cancel or diversify: it's to make a well-plotted, entertaining and most importantly self-contained film out of The Amazing Spider-Man 3. The ingredients are fine: the cast is solid, the director is talented, and the visual aesthetic is great. All they need to do now is make a movie.
Posted by Grant at 9:32 AM