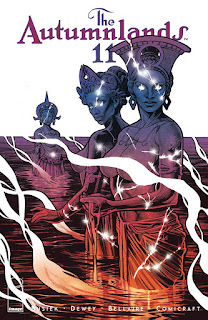 It has been more than two months since the last issue of The Autumnlands dropped: the sporadic release schedule of this comic has been hampering its momentum a tad. That's a great pity, because writer Kurt Busiek and artist Benjamin Dewey have been consistently presenting one of the best fantasy comics of recent years. I suppose an irregular schedule may simply be the price of quality in this case. It's a trade-off I'm happy to make.

In issue #11, Learoyd, Dusty and Aelbert approach the top of the mountain, and the source of the infection that has poisoned the village below. What they find at the peak is certainly a bit of a surprise, and an intriguing set-up for whatever happens next.

Part of the appeal of The Autumnlands is its comparatively unique setting. It started off appearing to be a pulp fantasy populated with anthropomorphic animals: Dusty is a pitbull terrier wizard-in-training, for example. Aelbert is a barbarian goat. Before long, however, the very human Learoyd arrived - with technology and a lot of mystery. Now that mystery has increased issue by issue. Clearly something happened to turn Learoyd's world into Dusty's, but for now there's no real information as to what it was. Action, great characters, and an intriguing mystery: how could any reader resist? (4/5)

Under the cut: reviews of Doctor Strange, Usagi Yojimbo and a delayed review of Darth Vader.

Magnus the Black continues to escort Julia north along the Black Road. This issue they come up against a pack of wolves. It is an oddly slight issue, one spent more with setting up what lies ahead (a walled city, and a Christian bishop) than in actually pushing Magnus and Julia's journey much further. As a result it all feels mildly unsatisfying. Garry Brown's artwork is great, however, and brought to life wonderfully by Dave McCaig's colours. Despite that, it simply doesn't feel like a great value story. (3/5)

While the Empirakul struggle to contain the mysterious creature from the cellar of Doctor Strange's house, Strange and his companions finally gather together enough remaining magical artefacts to launch a final counter-attack. This is one of those penultimate issues where everything gets shaped towards a climactic finale, so a lot of what it does is build up promise for the next issue rather than satisfying on its own. It is a solid and entertaining issue, but I do continue to feel Bachalo is not the ideal fit for this kind of book. His complicated, messy style sometimes makes a page a little difficult to easily read. (3/5)

After a run of single-issue short stories it is great to see Sakai extend this latest Usagi Yojimbo storyline out to three issues. In "The Secret of the Hell Screen" Usagi comes across a murder investigation at a soon-to-be-decommissioned Buddhist temple. There are already plenty of suspects, each with their own motive, as well as a creepy decoration screen inside the temple upon which someone has drawn in blood. This is typically exceptional stuff from Sakai: strong dialogue and character work, an intriguing mystery and beautifully composed black and white artwork. (5/5)

This issue actually came out two weeks ago, on 8 June, but a shipping delay meant I didn't get the chance to read it until this week. Two plotlines, running in parallel. In one, runaway archaeologist Dr Aphra hides out from Vader's pursuit - but she may be out of luck. In the other, Vader personally leads the hunt for the treacherous Cylo who has caused him so much trouble. Both threads are great: Vader's in particular is the sort of widescreen action at which this book has always excelled. There's also a strong drive towards a grand finale - the book wraps up in another four issues, and it looks set to be a pretty exciting climax. (5/5)
Posted by Grant at 12:06 AM