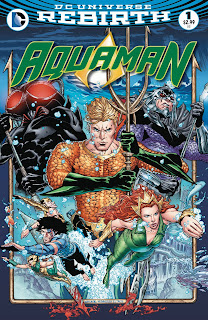 Now that we are about a month into DC Comics' Rebirth initiative, it is becoming fairly clear what the publisher's game plan entails. There's no doubt the publisher was heading into fairly scary territory, with sales declining across most titles and the long-term fanbase becoming increasingly vocal in criticising the creative direction and choices of the New 52 superhero line. It seems to me that Rebirth is less about re-energising the company's characters and more about saving the furniture. New ideas can wait for another day: Rebirth is about giving long-term readers the exact sorts of characters and situations with which they are most comfortable.

Take Aquaman, for example, which launches this week with an all-new volume. It is no surprise to see the first storyline out of the gate feature Black Manta launching yet another assault on Aquaman and Mera. It is effectively like launching Action Comics with a Superman/Lex Luthor/Doomsday triple-header (see below), or throwing Tim Drake, Cassandra Cain and Stephanie Brown into action in Detective Comics (also see below). These new books are specifically tailored to give pre-existing readers immediately familiar set-ups and to stimulate their sense of nostalgia. To an extent this approach works perfectly fine: Aquaman #1 is an entertaining read, with some nice character set-ups and a solid pace. To a further extent, however, it really is just more of the same. The last decade or so has seen DC go out of its way to make everything feel like the 1960s again - only with bleak ultra-violence thrown in for good measure. Rebirth is making everything feel like the early 1990s instead. So far the bleak violence is taking a back seat, and I hope it stays there, but I can't help but feel DC needs something a bit more interesting to fully retake the American comic book market.

Other thoughts on Aquaman #1: the art by Walker and Hennessey is a little bit off, as if there's an odd hint of Frank Quitely about some of the pages that jibes with the more traditional super-heroic look. I'm also a little concerned this first issue is leading into another 'on the run and falsely accused' storyline, which was only recently done for half a year in this very title by Cullen Bunn. (3/5)

Under the cut: reviews of Action Comics, Detective Comics and Robin: Son of Batman.

To DC's credit, in aiming to emulate an early 1990s Superman comic, they have gone straight to the source. Dan Jurgens was pretty much the key writer of the Superman books back then, when the books found great success with a string of cross-title epic storylines including "The Death of Superman", "Reign of the Supermen", and so on. This feels remarkably similar: Lex Luthor has announced himself the new Superman following Kal-El's death - only an alternative universe Superman from before the New 52 has also arrived to stop him. Now Doomsday has emerged, wrapped in his original clothing from his debut, to fight them both. It's certainly action-packed, and moves quickly, but it also suffers from throwing a pile of story questions in the air and not taking much time to push them along. With a fortnightly schedule, however, these answers will hopefully come sooner rather than later. Top marks for a great cover too. (3/5)

The New 52 screwed over Tim Drake. There really isn't any questioning that. The lead-up to the change set up a lot of that damage: his weird rejection of the Robin name in favour of the near-identical Red Robin, the shift of the character away from Batman and Gotham. Detective Comics seems to be striving to pull him back into the fold again, but to an extent it's working on top of a little too much damage. He used to be the best of the Robins, and now he's the kid who didn't even want to be one. As a fan of the character since his debut, his current position is unsatisfying. As for this particular issue of Detective, Batwoman continues training up Batman's sidekicks in preparation of an unknown future assault on Gotham's vigilantes. It does not do anything wrong, but it also feels remarkably by-the-numbers and ordinary. Clayface continues to seem a poor fit for the book, and brings to mind Marc Andreyko's unpopular attempt a year or two back to reformat Batwoman as a team book. Some nice character moments between Tim and Bruce lift this book up a point, but otherwise it really is a two-star book. (3/5)

It's a tiny bit delayed, but Robin: Son of Batman comes to a close with this final issue. The character now moves on to lead the new Teen Titans, and to team up with Jonathan Kent in Super-Sons. It is a satisfying climax that wraps up this one lengthy storyline. Fawkes' script has a lot of well-placed humour and great dialogue. It is a shame the book ends here now that Fawkes has established two great sidekicks for Damian - I'd have been happy to see a few more issues with this team together. Hopefully at least Nowhere will follow him into Teen Titans. Ramon Bachs' artwork has been perfectly pitched for this book too: bright, fun, and nicely exaggerated. (4/5)
Posted by Grant at 5:13 PM