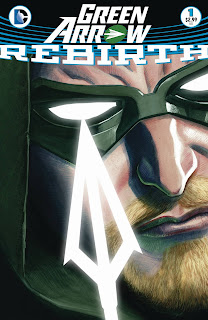 DC's Rebirth initiative looks to re-work their line of superhero comics to make them brighter, more upbeat, and with all of the elements lost in the New 52 reboot that readers really would much rather have kept. From this special one-shot it looks like Green Arrow may be one of the beneficiaries of this new program. I sampled Green Arrow when the New 52 launched, and found it to be a pretty ordinary book with its protagonist reworked in a manner that made him younger and blander. Oliver Queen's relationship with fellow superhero Black Canary was removed, which seemed particularly sad. It was not simply that the version of the character I liked had been changed. It was that the character that emerged was simply not as effective as its predecessor.

That looks pretty well set to reverse with this relaunch. Oliver is recognisably back to his old look and style, and the book makes some great material out of reuniting him with Black Canary - although of course in this rebooted continuity they have barely met before. Readers of the New 52 Black Canary comic - which really was an excellent take on the character - will be happy to see she makes the jump to this title pretty much unchanged. The two characters work incredibly well together. In particular it's great to see Canary provoking him so much ('How can you fight the man if you are the man?').

There is a great team-up adventure here, that wraps up satisfactorily while leaving a door open to a future story arc. The characters are strong and entertaining, and Otto Schmidt's artwork matches it all fabulously - it's more in the Batgirl/Black Canary area than a traditional DC look. I bought this issue on a whim, but it looks like Percy and Schmidt's work is going to pay off: I'm hooked into checking the regular series out in two weeks. (4/5)

Under the cut: reviews of Doctor Who, Giant Days and Superman Rebirth.

There's a lot in common between Titan's Doctor Who miniseries and Marvel's Star Wars miniseries. They both present self-contained five-issue storylines, focusing on a different key character (one of the Doctors or a Star Wars rebel), and doing a solid job of capturing the general tone and dialogue style of the source. Another thing they have in common is their quality. They are solid pieces of tie-in fiction, and fans of the property will get a lot out of them, but other than the die-hards and enthusiasts there aren't many more people likely to really enjoy them. They do their job. It would be nice to see someone take one of these miniseries and really make something out of it. (3/5)

Student short film competitions get an absolute skewering in this issue: the desperation, the obsessive dedication, the over-inflated egos. Pretty much the only thing John Allison misses is the student making a short film about somebody committing suicide (it's seemed a perennial fixture of every student film festival I've seen). Esther agrees to act in a short because she fancies its director. Susan and Daisy make a film of their own once they learn about the five thousand pound grand prize. It's pretty much business as usual, with strong character comedy, a fairly self-contained story and bright, appealing artwork. This is simply a flat-out fun comic book. (4/5)

If the Rebirth books are intended as jumping-on points for new readers, then Superman Rebirth #1 is an unmitigated failure. The bottom line is that this book is an epilogue to the recent "Last Days of Superman" story arc, with Lana Lang finally meeting the pre-52 Superman for real and sharing a conversation with him. As an epilogue it works fine, and hopefully DC will think to include it in their inevitable "Last Days" trade collection, but as an introduction to new readers I imagine it is somewhat impenetrable and dull. (2/5)
Posted by Grant at 5:44 PM