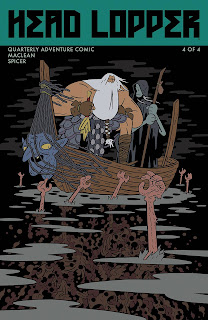 The Headlopper Norgal, the head of the blue witch in hand, finally reaches the lair of the evil sorcerer Barra. Meanwhile the treacherous Lord Servin Lulach approaches - but to what end? The storyline comes to an action-packed conclusion in the final issue of Headlopper.

I have really, really enjoyed this comic. Andrew Maclean has told a fairly similar fantasy quest story with a grim, bearded warrior protagonist, a catty disembodied head as a sidekick, and a wide cast of evil wizards, feudal lords, beasts and monsters as their antagonists. The artwork has been simple but wonderfully effective. The tone has been beautifully self-aware and amusing. The extra-length issues have really helped to make each section of the storyline feel really satisfying to read.

What Maclean's book really reminds me of is Lewis Trondheim, the excellent French writer/artist whose books like Le Donjon, La Mouche and Lapinot have a very similar combination of simple and effective art, well-placed humour and an overall sense of whimsy. The collection edition of Headlopper is out in October. It looks like a second miniseries is due next February. I can't wait; this stuff is marvellous. (5/5)

Under the cut: reviews of Daredevil and The Wicked + the Divine.

This issue sees Matt Murdoch undercover in a Macau casino, attempting to defeat a gambling scam that uses a telepathic player to read the minds of his rivals. It is a great concept, and Soule has written a very clever little storyline around it. It all leads up a great cliffhanger ending with the unexpected arrival of another Marvel Universe superhero. I'm keen to read issue #9. I have been a bit uncertain about this relaunched volume, but this latest issue feels like it took its direction from the outstanding Waid/Samnee run that preceded it. (4/5)

Part 4 of "Legacy of Spock" sees two survivors from Nero's ship make their last-ditch attempt to complete the task of killing all Vulcans. It is a great action climax, and significantly it is also one that does a tremendous job of respecting Leonard Nimoy's performance in the role of Spock. In many ways this storyline has been the farewell celebration of Nimoy's contribution to Star Trek that we never got to have. It's an unexpectedly emotional read. (3/5)

While the last few issues of The Wicked + the Divine had provided some much-welcome action and energy, this latest issue slows down considerably to provide something even nicer: explanations. We have seen that Laura somehow returned from her death at Ananke's hands, but until now we did not know the details of how she survived or what she is aiming to do. It is great to have that filled in at last, and leaves the title well-placed to run fast downhill all the way to its climax. (4/5)
Posted by Grant at 4:58 PM