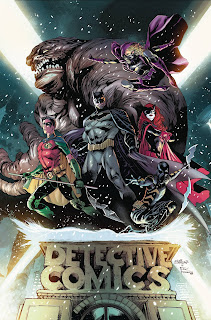 DC has always looked for ways to differentiate between Batman and Detective Comics. They are both regular titles starring Batman, after all. From time to time it usually settles down to being Batman for over-the-top superhero stuff and Detective for more grounded crime stories. For a while Detective Comics was handed over to Batwoman instead. More recently Batman has been acting as a Hollywood blockbuster-style high-concept title, with Detective as a more traditional secondary book.

For DC Rebirth, however, it has been transformed into a team book with Batman and Batwoman leading Red Robin, Spoiler, Orphan (aka Cassandra Cain) and Clayface. It has also been renumbered: not back to issue #1 but rather all the way to the original numbering. This is issue #934, which is a bit of a shock after DC and Marvel have spent so many years aggressively restarting their series.

It partially works. The set-up is that some unknown party is monitoring Gotham's vigilantes, and Batman - who clearly knows more than he's saying - decides to assemble a 'boot camp' to train up some of the younger heroes to make sure they're ready for whatever comes. It's great after Batman & Robin Eternal to see Red Robin, Spoiler and Orphan teamed up, and it always a pleasure to see Batwoman get some exposure. I'm not so convinced by Clayface, whose appearance here harks back to the fairly poor final issues of Batwoman when a similar team was assembled. The artwork here is solid enough, but James Tynion's script feels slightly under-done. He lacks the strength of other key DC writers like Scott Snyder or Geoff Johns when doing this stuff, and more often than not it feels a bit derivative and formulaic. Hopefully he'll pick up as he goes, now that the slightly awkward set-up is out of the way. (3/5)

Under the cut: reviews of Black Canary, Doctor Who: The 11th Doctor, and Poe Dameron.

Black Canary - this volume at least - comes to an end with a surprisingly original and unexpected finale. We see the future of Black Canary, as Dinah leaves the band and dedicates herself to a solo musical career, even at the expense of her superhero identity. Could it all be true? It's a great final issue with a strong script by Fletcher and great artwork by Wu and Jarrell. Its final pages work perfectly: they close this volume off in a satisfying manner, and push Dinah off onto new territory - which we already saw last week in Green Arrow Rebirth. It's been a really fun series. If you missed it, track the collected editions down. (4/5)

The 11th Doctor's adventure continues into its 10th issue with no end in sight. While the previous volume of this comic had an overall story arc, this second run has abandoned any pretence of separate adventures and just dived into one long epic instead. For hardcore fans of the series - which, let's face it, is anybody reading this comic - it has been solid-gold continuity porn. River Song, Abslom Daak, references to the Master, the Time War, the Daleks and John Hurt's War Doctor. Rob Williams has been doing a great job of upping the stakes and the threat every issue too, so now that we're at issue #10 it's all looking pretty dire for the Doctor and his companions. This is great stuff that does exactly what a Doctor Who comic book should do. (4/5)

Poe's first mission to find the elusive Lor San Tekka concludes in a rather abrupt fashion. It also gets really weird once the alien egg at the centre of the storyline finally hatches. Marvel has generally been doing a great job with their Star Wars books, but this latest ongoing feels like a bit of a misfire. Poe Dameron is a new character, and with only a supporting appearance in one film I feel maybe we simply don't know him well enough for this book to work. Phil Noto's artwork still feels a poor fit for the material. The X-Wing versus TIE Fighter scenes have a flat, stationary quality that simply doesn't work. All in all it's just a bit ordinary. (2/5)
Posted by Grant at 5:07 PM