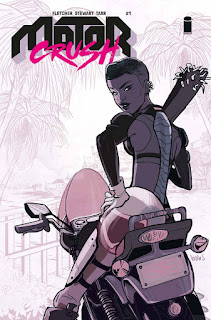 Brenden Fletcher, Cameron Stewart and Babs Tarr scored a minor hit for DC Comics with their hipster-esque, inner suburbs take on Batgirl. They moved on at the end of the New 52 era, and this week's Motor Crush shows off where they landed: a new street-racing science fiction-edged series at Image.

Domino Swift is a professional motorcycle racer by day, but by night she competes in furious and violent illegal street races for the chance to score 'crush', an engine narcotic that massively accelerates the speed of one's bike. When her mechanic father's assistant accidentally discovers Domino's stash, it lets off a chain of unexpected events that send her running for her life.

Babs Tarr's artwork feels a lot more loose and rough here than in her DC work, which helps to give Motor Crush an edgier, less 'safe' feel. The script by Stewart and Fletcher sets up the media-saturated world of professional sports and the gang-run street races very effectively. It's a nice dramatic setting, and the characters as revealed are solid and intriguing. There are two plot developments in this debut issue that really stand out: they're unexpected, horrifying and point to a much darker series going forward than the first few pages might have suggested. Future issues will need to seal the deal, but it looks like Image might have another top-notch science fiction series on its hands. (4/5)

The second jumbo-sized issue of DC's paranormal romance finally arrives as Boston and Berenice continue their attempt to solve the ghost Amelia's murder. Medina's artwork is beautiful (with assistance from Phil Hester in the second half), and while the book features that low panel count that usually frustrates me, Sarah Vaughn's script contains enough well-paced and strong narration to soften the blow. There is a wonderful 'old school' vibe to this book: if the pace was faster it could have come straight out of the 1980s. (4/5)

The girls' new house is broken into and burglarised, in a surprisingly serious issue of Giant Days. Some of this comic's strongest issues have come when they've expressed situations - usually related to undergraduate life - that strike a chord or remind the reader of their own university experience. This issue isn't any different, and I really wish it was. There are still a solid pile of jokes scattered throughout, but that core invasive experience really hit me harder than I would have expected. (4/5)

Ollie, Dinah and John are back in Seattle, where Ollie is still presumed dead with a diabolical villain controlling his company. The public also seen divided over his Green Arrow identity - some that his enemy Cyrus Broderick is all too keen to exploit. It is nice to be back on home turf again after a few issues of international jet-setting and tropical islands. Percy is falling back on the old superhero comic standard of a villain using deception and fakery to implicate the hero in criminal activity. It's a trope so well used that Dan Abnett is using it on Aquaman right now. Percy does it well, and Otto Schmidt's distinctive art and colours make it all pop off the page. It's great stuff. (4/5)

I am still not quite connecting with Ringside. The setting - professional wrestling mixed with organised crime - should make it a knockout, yet the story seems to just plod along from issue to issue without much variation in tone or style. A conversation here. A small moment of blunt violence there. The ingredients are there, particularly Barber's stripped-back and elegant art style, but it still is not quite adding up to a must-read. Thus far, it's a series to like but still not one to love. (3/5)
Posted by Grant at 5:15 PM