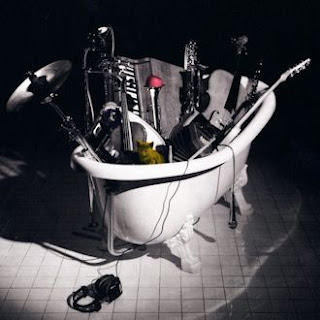 I have previously reviewed Japanese jazz-rock band Tokyo Jihen's 2011 album Great Discovery. This 2007 precursor features many individual members of that band, but is actually a solo recording by its lead singer Ringo Sheena. It was produced as the soundtrack to Mika Nishikawa's feature film Bakuman (adapting the popular manga) in collaboration with composer and violinist Neko Saito.

To describe Japanese Manners as a soundtrack would, however accurate in specific terms, miscommunicate the style of the album. Sheena had originally envisaged an electronic instrumental score, but it was at Nishikawa's insistence that the music was expanded to include the violin, vocals and an entire orchestra. This is, if anything, an experimental jazz album. It is also pretty outstanding.

I think Ringo Sheena is an exceptional singer. She has a distinctive husky voice that really sets her apart from her Japanese contemporaries, and there is a strong sense of play and experimentation in her music. I would recommend her work to anyone with an interest in good music.

The album kicks off with "Gamble", an epic number that sounds like somebody shoved a James Bond theme and the Beatles' Sgt Pepper into a blender and added Japanese lyrics. It is one of the best songs I have heard this year, and has a huge amount of emotion and power to it. With each listen - and I've been listening to it quite a bit this week - it grows on me more.

From there the album moves on to "Stem", which is essentially an orchestral jazz track. It's relatively conventional, with a slow, soulful kind of tone. "Confusion" is more poppy and upbeat, and boasts a great piano solo.

"Firstlove Singer" presents a sharp contrast, utilising electronic percussion along with the orchestra to create a very filmic and haunting effect. In another sharp change, "Papaya Mango" is a cover of a popular Rosemary Clooney song. It is capably produced, but ultimately a pretty generic jazz cover. That sense of the generic also hampers "Consciously", the fifth track.

"Bathroom" begins sounding like relatively bland pop. It is actually a tiny bit irritating at first, but it settles into something quite enjoyable by the end, particularly once the orchestral elements sneak in. Sheena moves back to jazz with "Camouflage". The track has some great and frantic violin work, particularly at its deliberately chaotic finale.

"Poltergeist" is a fairly traditional-sounding waltz, which is in itself a mild surprise on this album. Sheena follows it up with an accordion-infused tango, "Temporary Virgin", and then an electronica-infused pop song, "Courtesan". This latter track really stands out; it almost feels as if it is on the wrong album.

"Scar" is a piano-based, melancholic song. Like many of the songs it does build until by the end Sheena is backed by the full orchestra. It is an effective and distinctive re-recording of a Tokyo Jihen song. The album wraps up with "Memory", a rather quirky bilingual duet. It is a whimsical way to conclude matters, but oddly works wonderfully. It sounds like something out of a Broadway musical.

This is a wonderfully eclectic, imaginative album. Even if one track does not impress, it is like that the next one will, as Sheena ducks and weaves her way around the fringes of music genres. Music this inventive should be treasured.