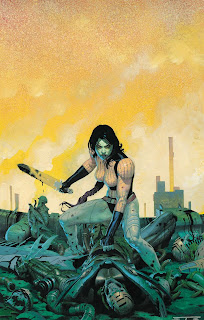 With the huge box office success of the film Guardians of the Galaxy, and a sequel coming in 2017, it is no surprise to see Marvel capitalise on the interest with a couple of new Guardians spin-off comics. There's a new Star Lord book, a new Rocket Raccoon, and now Gamora gets her own self-titled series.

It's a prequel storyline, set back when Gamora was the loyal daughter of Thanos and competitive sibling to Nebula. As a rule I don't particularly like prequels: I like to see what happens next, not what happened to get a story to where it started. To the credit of writer Nicole Perlman it is well developed and intriguing, but at the same time it's not quite intriguing enough to keep me reading for the long-term. I would much rather see Gamora get a present-day solo series.

Marco Checchetto's artwork, combined with Andres Mossa's colours, presents an eye-catching and distinctive alien universe. There's also a nice sense of movement to the issue's action sequences, and a solid set-up of the first story arc. While I am unlikely to continue myself, I suspect there is a solid audience of Marvel fans for this kind of story. It's solid, just not quite strong enough to add to my already excessive pull list. (3/5)

The human militia takes drastic steps against the animal fort, with Jesse and Sandor stuck in the middle. We're four issues in and this continues to be a series to like, but not perhaps one to love. It is competently written and attractively illustrated, but there's something about the concept - animals all gain the power of human intelligence and speech and turn upon the human race - that feels a little too outlandish and difficult to swallow. For now though it is a solid foundation, with plenty of potential to take off in a really interesting direction. (3/5)

This artist-jam set-up on Doctor Strange really needs to stop, as the scrappy, rushed aesthetic is not doing the book any favours. It isn't helped by this current storyline's rambling narrative, in which a powerless Strange tumbles from one super-villain encounter to the next without any real noticeable structure or purpose. It feels as if it might pull together next issue, but it's been a bit of a slog to get through. I love Dr Strange. I think he's a great character, but he deserves a much better ongoing title than he is currently getting. (2/5)

The Surfer and Dawn accidentally get swallowed by Jumbonox the Giganormous, who if nothing else has one of the coolest names in the Marvel Universe. The typical whimsy and silliness that has become this book's stock and trade continues apace here. It's a rather sweet little diversion packed with imaginative ideas, albeit a somewhat slight one. Michael and Laura Allred's artwork remains the book's highlight: it has such a bright, entertaining simplicity that it's always a pleasure to see. (3/5)

Hazel and Kyril have found the artefact they were looking for, and now they also meet a strange woman who claims to have a relationship with the elusive Alex Braith. This issue feels like an expansion of the current story arc towards something much, much bigger, with the introduction of new characters and a fresh injection of horror elements. Andy Belanger's artwork and Lee Loughridge's stark colours contribute a huge amount of Southern Cross's moody atmosphere, particularly Belanger's thick, oppressive inks. (4/5)

Superman and Frankenstein team up to take down an alien fugitive - only to discover Frankenstein's estranged wife standing between them. While it has been great seeing Frankenstein return to the DC Universe, this two-part storyline feels much too rushed and slight to have been worth the bother. We have had a few of these two-parters lately, and while the brevity sometimes works in this case I really craved something a bit longer and more involved. Mahnke and the various inkers' work is very strong, but it ultimately all felt a little shallow and slight. (3/5)

An official of the Shogun dies eating a slice of pufferfish, sending Usagi and Inspector Ishida on a fresh hunt for a murderer. It is a neat short story, with a small 'Chibi Usagi' story to fill out the page count. I like the flexibility that Sakai employs on this comic, so that a brief but effective story like this can be exactly the page count it requires, and doesn't get needlessly padded to fit a standard length. There is a wonderfully black sense of humour about the first few pages as well, and a good balance of large and small panels throughout. (4/5)
Posted by Grant at 11:58 PM