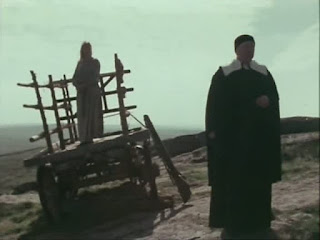 It is 23 December 1975, and time for another annual episode of A Ghost Story for Christmas.

Sir Richard Fell (Edward Petherbridge) inherits the country seat of Castringham, and intends to settle there with his new wife Augusta (Lalla Ward). The house is cursed, however, and the longer Sir Richard stays there the more consumed he becomes with visions of his ancestor Matthew Fell who condemned a woman to death for witchcraft.

Another M.R. James short story gets a Christmas-time short feature, courtesy of director Lawrence Gordon Clark. The film is based on a script by playwright and screenwriter David Rudkin, whose other film and television works include Fahrenheit 451, Artemis 81 and Penda's Fen. While it boasts some nice horror imagery, and a particularly unexpected climax, it is the weakest of the three Ghost Story films I have seen to date.

Rudkin relocates the action form M.R. James' original Suffolk location to Cornwall. It is an odd decision: the desolate moors give the film a rather bleak, lonely quality, but that quality feels a poor fit for the Christmas season in which the film was originally broadcast. Both The Treasure of Abbot Thomas and Lost Hearts had a cosier, confined quality that matched the festive season much better. The Ash Tree does not seem to match Christmas at all.

The Ash Tree instead seems concerned with oppressed sexuality and jealousy. Rudkin's script changes the ill-fated crone Anne Mothersole into a younger and deliberately more attractive woman (Barbara Ewing), and lays heavy implications that it is Matthew Fell's lust for her that ultimately drives him to order her death. It places the film in very similar territory to Matthew Reeves' cult classic Witchfinder General, and explores similar territory of male sexualised power over women in English history.

Unfortunately it all gets a little muddled. We are led to sympathise with Mothersole as an innocent victim, yet other events in the film make it very clear that she actually is the witch that she has been accused of being. There is also the problem of Richard Fell, a century later, being tormented for the crimes of his ancestor. It is a stock element for this kind of ghost story, yet it also interferes with the viewer's ability to sympathise too heavily with Mothersole.

The climax is probably the film's boldest element, in which Richard Fell's torment reaches a peak. Small spider-like demons with humanoid faces infest his bedroom. With a typically low BBC budget - and indeed A Ghost Story for Christmas was produced on an even lower budget than was the standard for drama - it is a ridiculous ask that the production team create realistic or believable creatures. It is a make-or-break moment for the film, and the viewer's acceptance of the climax boils down to just how far they are willing to suspend their disbelief. They are deeply disturbing creatures, whose presence and appearance imply a combination of devil worship and aborted fetuses. The implication for Richard Fell and Anne Mothersole's relationship is pretty clear.

All in all The Ash Tree is a disappoint compared to the last two ghost stories. The acting is perfunctory without anybody particularly making an impression. The tone is awkward and conflicted. The aesthetic is about as far away from Christmas as the BBC have managed so far in these horror film viewings. It is, at best, a mediocre effort.
Posted by Grant at 8:29 AM