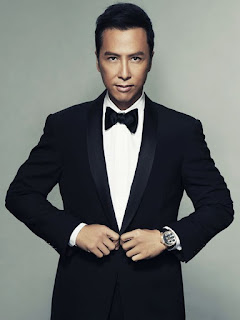 One of the most common responses I have seen to Disney's new film Rogue One: A Star Wars Story, apart from the ones that would involve spoiling the movie to explain, is a general shock and joy at the performance of Donnie Yen as blind Force-sensitive warrior Chirrut Imwe. For many viewers in the English-speaking world Yen is a surprising new action star: talented, athletic, handsome and funny. For viewers in the Chinese-speaking world he has been a major action star for a quarter of a century, ranked up alongside male contemporaries like Jackie Chan, Jet Li and Chow Yun-Fat. It has taken Yen longer to make a successful break into Hollywood - a mid-90s attempt failed when he accepted a role in the fairly ropey sequel Highlander: Endgame - but now that he is here I would not be surprised to see American studios begin lining up to offer him some high-profile roles.

Thankfully for the new fans who have first seen Yen do his action thing in Rogue One, there is now a massive back catalogue of awesome often-times over-the-top action films to check out. I have picked five that I think will likely give the new viewer a solid showcase of what Yen can do. I have been a huge fan of his work for years, and it's great to see him make such a huge impact this year.

In 1992 producer Tsui Hark decided to remake King Hu's legendary martial arts film Dragon Inn (which is broadly credited with inventing the modern wuxia, or martial hero, film genre). With director Raymond Lee he succeeded in creating a fresh take on the original story, with a stunning lead cast including Brigitte Lin, Tony Leung Ka-Fai and Maggie Cheung. Donnie Yen plays the villain: a power-mad eunuch named Tsao Siu-yan who sets the story in motion and lurks in the background until the film's legendary two-against-one sword-fighting climax.

Donnie Yen's first major production as a movie star was this excellent 1993 martial arts film from director Yuen Woo-ping - who would later choreograph all of the action for the Matrix trilogy. Here Yen plays Wong Kei-ying, an comrade to physician Yang Tianchun who masquerades by night as the Robin Hood-like bandit Iron Monkey. Iron Monkey became an earlier cult hit among American fans of Hong Kong action cinema, and was followed by a curious 1996 sequel in which Yen returned to play an entirely different character using the same Iron Monkey moniker.

Ip Man marks Yen's signature role, and the huge success of this first film led to two sequels and counting - not to mention a raft of unofficial spin-offs, prequels and sequels focusing on the legendary Chinese martial artist. Ip Man was a master of wing chun, and famously trained a young Bruce Lee. To perform the role Yen actually trained from scratch in the art of wing chun, and then worked with action choreographer Sammo Hung (another legend of Hong Kong action cinema) to create the film's striking and elegant fight scenes. It is probably Yen's best role, and certainly the one for which he will be remembered in the decades to come.

Yen plays one of the lead roles in this highly patriotic historical action film, in which the Empire of China has sent assassins to murder democracy advocate Dr Sun Yat-Sen on a visit to Hong Kong, and the anti-imperial resistance has accordingly dispatched a disparate team of bodyguards to keep Dr Sun safe. The first half of the film is character development and narrative set-up. The second half is one massive, rolling action sequence across early 20th century Hong Kong. Not only does Yen play an alcoholic and disgraced martial artist looking for redemption, he also acted as the film's action director - and it's some of the best action seen on screen in the past decade.

Legend of the Fist: The Return of Chen Zhen

Chen Zhen is a classic martial arts character in Hong Kong cinema, originally played by Bruce Lee in his 1972 film Fist of Fury. The character subsequently returned in numerous film and television adaptations, including Jet Li's early hit Fist of Legend (1994) and a 1995 television drama that starred an early-career Donnie Yen. Here Yen returns to the role, where a post-World War I Chen Zhen joins the Shanghai resistance to fight an invasion by the Japanese. It is all ridiculously over-the-top stuff, ably directed by Andrew Lau (The Storm Riders, Infernal Affairs) with a battlefield prologue sequence that must be seen to be believed - and even then it is hilariously unbelievable.
Posted by Grant at 5:09 PM