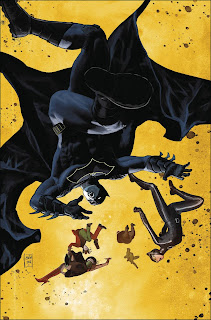 When DC announced Tom King was taking over as the writer of Batman I was initially very excited, because through his astonishing work on The Sheriff of Babylon and The Omega Men he had become of the best and most interesting writers the publisher had. My initial reaction to King's Batman, however, was disappointment. It was solid without being exceptional, and I was expecting exceptional. The second story arc, "I Am Suicide", seemed much better than the first, "I Am Gotham", which gave me hope that the A-grade writing that made King's earlier series so amazing was gradually coming back.

With Batman #12 it comes back and then some. The previous issue finished with Catwoman unexpectedly betraying Batman, leaving his plan to kidnap Psycho Pirate from under Bane's nose seemingly in tatters. I had expected to see how Batman got out of this trap, but instead I got something so much better.

This is a very special issue, as Batman fights his way through a series of gorgeous double splash pages on a path from the bottom of Bane's fortress to the top. I usually dislike splash pages, but here they work perfectly because they're covered with the text of a hand-written letter from Bruce Wayne to Selina Kyle. This is an issue that explains Batman, and also the relationship between Batman and Catwoman. Every writer of Batman needs to know what their idea of the character is, and how he works: King's is honestly one of the best I've ever seen. This is one of the single-best comic book issues of the year. (5/5)

Under the cut: reviews of Doctor Aphra, Revival, and Superman.

One of the standout elements of Kieron Gillen's Darth Vader comic was the rogue archaeologist Dr Aphra, who briefly worked as Vader's sidekick before betraying him to the Emperor. Now she has graduated to an ongoing series of her own, accompanied by a Wookiee bounty hunter and a pair of homicidal assassin droids. It seems a pretty big deal to see Marvel expand its Star Wars line to original characters, but then the cast here absolutely deserve it. Gillen's script is funny and imaginative, while Kev Walker's art has more than a touch of Moebius to it. A backup strip by Darth Vader artists Salvador Larroca and Edgar Delgado is an added bonus. (5/5)

We're neck-deep into the climax of Revival, which makes each of these issues hugely satisfying. The characters are beginning to converge, the origin of the revivers is almost entirely revealed, and the stakes are at their highest. I think there are two issues to go now, and as it draws in I really appreciate how the book is focusing back onto its central characters and their changed relationships. I am going to miss Mike Norton's beautifully expressive character work, and Mark Englert's strong colours. This has been one of the best-looking comics out there. (4/5)

One of my favourite comics in the New 52 was Frankenstein and the Agents of SHADE, a view not shared by the majority of readers given that the book was cancelled after a year or so. Despite that cancellation, it's good to see DC hasn't forgotten Frankenstein because he's front and centre in Superman #12 and inexplicably hell-bent on murdering the editor of a Hamilton county newspaper. This is your standard superhero-versus-superhero fight issue, and it's a pretty well plotted and laid out one at that. Tomasi and Gleason absolutely nail Superman's tone: it's a hard title to write, because cynicism simply doesn't have a place there. (3/5)
Posted by Grant at 9:58 AM