Doctor Who: "The Tyrant of France" 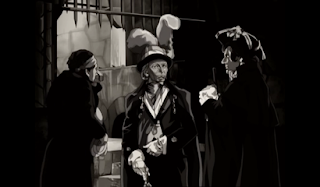 It is 29 August 1964, and time for the next episode of the Doctor Who serial "The Reign of Terror".

The Doctor (William Hartnell) gains an audience with the so-called "tyrant of France", Maximilien Robespierre (Keith Anderson). Susan (Carole Ann Ford) continues to suffer a fever, however she and Barbara (Jacqueline Hill) are reunited with Ian (William Russell). As Barbara seeks medicine for Susan's condition and Ian continues his search for the English spy James Stirling, both fall into a trap.

Like all seven episodes of "Marco Polo" before them, the fourth and fifth episodes of "The Reign of Terror" no longer exist in the BBC archives. Audio recordings of both episodes have been recovered, so we can hear what happens in each episode, but video recordings at this stage are unlikely to ever be recovered. When releasing this serial to DVD BBC Video commissioned special animation to replace the lost visuals, and it is these animated versions of the episodes I have watched for the next two reviews.

I think it is important to make the distinction, because regardless of what one thinks of this first animated episode it is clearly not the episode that viewers would have watched in 1964. All of the subtlety of the actors' expressions are gone for good, and what we are left with are computer-generated approximations of the same. Animation is expensive, and the likely revenue from the release of an incomplete black and white children's television drama from 1964 is small, so it would be churlish to be overly critical of the animation quality on display here. To its credit, it's the best I've seen attempted (an earlier attempt to animate episodes of "The Invasion" were not particularly watchable) and it does present a fairly unique look. It does cut from shot to shot oddly fast, however, and its clear that talking heads were much more affordable to achieve than the sorts of larger-scaler medium shots we likely would have seen back in 1964. It does give the viewer something to look at while listening to the soundtrack, but to an extent I think the BBC's earlier narrated audio releases on CD made for a more enjoyable experience.

Of course none of this is helped by the episode itself, which is one of those middle-of-the-story runarounds where characters seem to move from one location to the next but the story does not sufficiently progress at the same time. Ultimately it is all a little drab and boring. The episode does introduce Keith Anderson as the villainous Robespierre, but as we only have his voice and some animation to go on it's difficult to really assess how good he is in the role.

This is a weirdly inconsistent serial, one that seems to gently list like a drifting galleon from comedy to drama to action without ever really picking a style and sticking to it. It also suffers from failing to actually explore its own historical setting. The earlier historical serials "Marco Polo" and "The Aztecs" actually investigated and fully exploited past cultures and conflicts. "The Reign of Terror" seems mostly about sneaking around avoiding guards and befriending spies. Given the real-life terrors enacted on the French during this period, there is an awful lot more that this episode could have done.

At least we're well past the halfway point with only two episodes to go. Overall, this marks the 40th episode of Doctor Who. So far 26 of them are what I would consider good or better; "The Tyrant of France" was not one of them. The quality ratio slips a little to 65 per cent.
Posted by Grant at 12:32 PM