Doctor Who: "Prisoners of Conciergerie" 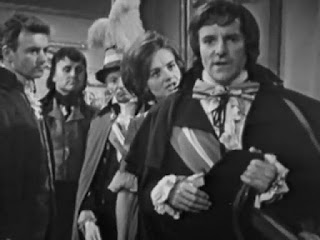 It is 12 September 1964, and time for the final episode of Doctor Who's first series.

"The Reign of Terror" reaches its climax with a much-needed change of pace, and an injection of a real-life historical turning point. After five episodes of fairly generic escapes and recaptures, the serial finally returns to the sort of historical drama presented by "Marco Polo" earlier in the season. The Doctor and his companions become witnesses to history once again, with Ian and Stirling witnessing the fall of Robespierre and the TARDIS crew escaping France just as Napoleon seizes control.

The French Revolution was a bloody and horrifying exercise, and after some fairly direct gun violence in the second episode the serial has by-and-large shied away from showcasing the horrors that were involved. That, rather surprisingly, changes here. We do not see Robespierre get shot in the face during his capture (as occurred in real life), but we do hear the gunshot and we do see him dragged from his chambers while clutching his jaw in agony. It's a solid trade-off: no blood so as not to upset the child audience, but obvious enough that any adult with a knowledge of the Revolution will know exactly what happened.

The revelation that Lemaitre is secretly James Stirling is a clever idea, but is executed poorly. There's more than a little blunt exposition turfed out without any room given for characterisation or tone. Things improve enormously when Ian and Barbara go undercover at an inn to eavesdrop on Napoleon's meeting. It is a well crafted and entertaining scene, and includes a brief but strong performance by Tony Wall as Bonaparte. Similarly Robespierre's downfall is very dramatic and intense, with the Doctor and Barbara reminding audiences of their experience with the Aztecs and the importance that they let history take its pre-existing course.

All that is left at the end of the episode is for the Doctor to successfully retrieve Susan (Carole Ann Ford) from the Conciergerie prison and for the four travellers to safely return to the TARDIS. This has been a relatively weak serial, but to its credit its final episode does lift up the quality a great deal. It's a solidly enjoyable episode: the 28th out of 42 in total. Series 1 of Doctor Who winds up with an overall quality ratio of 67 per cent.
Posted by Grant at 9:49 AM