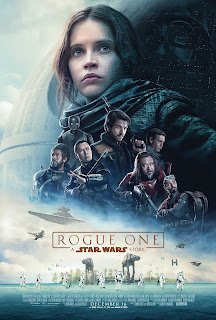 A long time ago in a galaxy far, far away, the Galactic Empire nears completion of its planet-killing space station the Death Star. At the same time the Rebel Alliance rescues a young woman named Jyn Erso (Felicity Jones) from an Imperial labour camp in order to user her to get to her father: the scientist who helped design the Death Star.

Or, in other words, Rogue One: A Star Wars Story recounts how the plans to the Death Star wound up in Princess Leia's possession at the beginning of the original Star Wars back in 1977.

This is the first of Lucasfilm's bi-annual range of Star Wars Story films, which tell side-stories in the same fictional universe as the main trilogies but that aren't exclusively following the Skywalker family. It has a lot to achieve in two hours: it needs to be an entertaining movie, certainly, but it also needs to demonstrate that Star Wars can be a worthwhile franchise once expanded beyond the limits of Luke, Han, Leia and their various offspring. Thankfully I think Rogue One succeeds on both counts, with certain qualifications.

I think the elephant in the room with Rogue One is that it is ultimately telling a story that had no need to be told. Nothing in the original Star Wars required further information. It was more than sufficient to know that the Rebel Alliance had secured top-secret plans to the Death Star, and the film began with them getting run down by Darth Vader who was desperate to retrieve them. No matter how interesting a back story can be developed, or how entertaining a set of characters are created to steal the plans in the first place, Rogue One never quite overcomes its own redundancy. It is a hugely enjoyable but ultimately unnecessary film - but of course that also arguably describes 90 per cent of all sequels and remakes ever made.

Tonally speaking, director Gareth Edwards has developed a film that sits very comfortably within the milieu of the Star Wars movies but which also manages to dig into some fresher, and slightly darker territory. I have seen quite a few people cite The Empire Strikes Back as comparable, which feels about right. It is certainly a less child-friendly film than, say, The Force Awakens, but at the same time it is not so adult that children can't enjoy it - although they may need some consoling and debriefing afterwards.

Edwards' aim was always to make a film that emphasised the "wars" in Star Wars, and I think he has comfortably succeeded. This is not a film about Jedi and individual heroes saving the galaxy, but rather an ensemble piece in which small victories are treasured and success comes with a significant body count. Despite the science fiction setting I did get a sense films like The Guns of Navarone, The Dirty Dozen, and even The Magnificent Seven while I watched it: all of them films about a disparate group of fighters working towards a cause in an almost-unwinnable context.

The film works well by focusing on new characters. While some pre-existing figures turn up in supporting roles - and part of the joy for a Star Wars fan is seeing them as they arrive - Rogue One focuses primarily on Jyn Erso and rebel spy Cassian Andor (Diego Luna). Andor is a wonderful sort of morally grey character, one who has no hesitation in shooting someone dead if it means completing his mission. As the film's protagonist Jyn is actually mildly unsuccessful: there is something in Felicity Jones' slightly mannered and arch performance that robs the character of any grit or realism. Compared to last year's Rey (Daisy Ridley), she definitely comes off second-best.

The supporting cast is packed with strong actors playing hugely enjoyable roles, and this is where Rogue One really gathers up a lot of its appeal and energy. Ben Mendelsohn is marvellous as Krennic, the Imperial official in charge of the Death Star's construction. He's an overly ambitious schemer while simultaneously doing a fairly poor attempt at his job. Mendelsohn makes him a very enjoyable villain through his embittered mannerisms and awkward attempts at authority. Other highlights include Alan Tudyk as K-2SO, a reprogrammed Imperial droid who gets most of the film's best lines, and Riz Ahmed as Bodhi, a nervous and somewhat traumatised shuttle pilot who defects to the rebels. The rest of the cast is filled with great actors - Donnie Yen, Jiang Wen, Mads Mikkelsen, Forest Whitaker and others - but with a finite running time and an ensemble cast they don't really get much time to fully develop or explore their characters. That's okay, obviously, since that's how this sort of ensemble-based action film works, but with the calibre of actor involved it's much more noticeable than usual.

The narrative feels slightly uneven, with an over-long first act, a weirdly under-cooked second act, but then a beautifully paced and structure finale with a significant but smooth shift in tone towards the conclusion.

Technically the film is marvellous, with the requisite wave of new spaceship and alien designs adding yet more variety to the already labyrinthine Star Wars universe. The film also hops around at a pretty brisk pace from one new planet to the next. In that respect Rogue One feels a lot more faithful to George Lucas' style of Star Wars rather than J.J. Abrams' actively nostalgic take in The Force Awakens, and I say that despite the numerous callbacks to other Star Wars films. It also does a commendable job of binding the original and prequel trilogies together, and helping to tie Star Wars up into one cohesive movie saga. More than any previous Star Wars film,

Rogue One aims itself almost exclusively at pre-existing fans, and I suspect they will enjoy it immensely. Certainly I am one of those fans, and while I may quibble over the odd performance, or awkward line of dialogue (hardly a new crime in Star Wars history), Rogue One is a crowd-pleasing and exciting sci-fi war movie that will more than tide fans over until Episode VIII hits next Christmas.
Posted by Grant at 6:19 PM