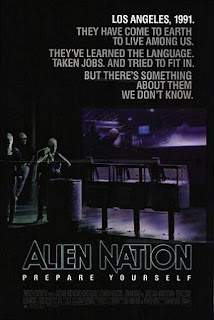 Los Angeles, 1991. A year after a massive alien spacecraft lands in the Mojave Desert, a population of 300,000 humanoid aliens - known as "Newcomers" - have settled in the city. A human police detective, Matthew Sykes (James Cann), is teamed with the police department's first Newcomer detective George Francisco (Mandy Patinkin) on a homicide investigation.

Science fiction is a great genre for allegory, and that's pretty much what we are dealing with in Alien Nation. It is, for all intents and purposes, a buddy cop movie with a focus on Los Angeles racism, but rather than pick up racism against Latinx or African-American communities it fictionalises the issue completely.

It is a rather clever conceit, and the Newcomers themselves look great in terms of make-up design, and it work very well to paper over the tremendously stereotypical cops-versus-drug-lords narrative underneath.

It's difficult to avoid the core problem of Alien Nation, which is that it is a generic racially-based Los Angeles cop movie. There have been so many of those that a film needs to really fresh angle to stand out and actually be worth something. It would be easy to assume the alien angle on Alien Nation provides that angle, but that would mean confusing innovative plots with evocative winder-dressing. The fine detail and background material of the film is great. The actual storyline is not. Despite some science fiction elements it is basically about a maverick cop seeing his partner gunned down on the street, and reluctantly teaming up with a minority rookie detective to track down the drug-manufacturing operation that's ultimately behind the murder. It has almost the same plot as To Live and Die in L.A., for example, but with less effective direction and visuals.

James Caan effectively plays a walking cliche, but do his credit he almost gets away it by sheer force of personality. Likewise Mandy Patinkin is saddled with the straight-laced rookie part, but does manage to give it enough of a naive, odd charm that it works very well. As the film's villain, Newcomer businessman William Harcourt, Terence Stamp seems really uncomfortable. Whether it's the less than stellar screenplay or the presumably uncomfortable prosthetic makeup, he spends the whole film coming across as distracted - or maybe just a little disinterested.

All that in mind, Alien Nation is still well worth viewing, precisely because of the aforementioned 'window dressing'. The Newcomers are an immediately fascinating species, and the hints of their culture and biology give a wonderful sense of reality. Most importantly their insertion into Los Angeles' multicultural community feels immediately believable. A subsequent television series of Alien Nation was much more creatively successful than the film precisely because it based itself largely around these details of alien culture and human-Newcomer relationships. When viewed after the series has long since been and gone, the film ultimately feels a bit like a warm-up.
Posted by Grant at 9:28 AM