Doctor Who: "A Bargain of Necessity" 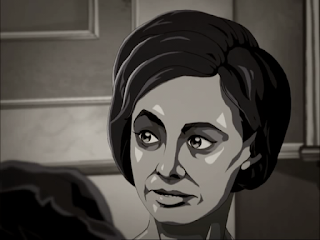 It is 5 September 1964, and time for the fifth episode of the Doctor Who serial "The Reign of Terror".

At the Conciergerie, the Doctor (William Hartnell) works to release Barbara (Jacqueline Hill) and Susan (Carole Ann Ford). Across town Ian (William Russell) has walked into a trap staged by Leon, who wants information about the protection ring.

"A Bargain of Necessity" shows a marked improvement over the previous episode, with a lot more action and plot progression. At the same time it does continue this serial's biggest flaw: it's ultimately just a string of captures and escapes until the Doctor and his companions can safely return to the TARDIS.

Writer Dennis Spooner has a rich catalogue of television works to his name, including The Champions, Department S, Jason King and Randall and Hopkirk (Deceased). For Doctor Who he was script editor during its second series, spearheading the attempt to transition the series from its original four cast members to an ongoing Doctor with a revolving series of companions. His own later scripts for the series are punctuated by a lot humour. His serial "The Time Meddler" essentially invented the 'pseudo-historical' model that has appeared in the series ever since. It is odd, then, that his first serial for Doctor Who should be so drab, listless and dull to watch. This episode is definitely one of the stronger ones, but it's still comparative mediocre stuff.

Ian's capture by Leon and subsequent rescue by Jules is probably the episode's most dramatic thread. It's surprisingly violent in places too, with Jules shooting soldiers dead as part of his rescue attempt. It's one thing to see a character get shot dead by a laser gun or Dalek energy beam. It is something else entirely to watch one human being shoot another in the gut. It is not presented in any graphic fashion (at least, not in the animated recreation), but there is a bluntness to it that really stands out.

Meanwhile the Doctor is back to his earlier routine of fooling a credulous gaol keeper into releasing Barbara and Susan. It works the first time, but not the second, and the Doctor finds himself blackmailed into leading the villainous Lemaitre back to the protection ring's safe house. It's all rather unsatisfactory.

This episode does creep over the line into being enjoyable, but only in fits and starts. In all honesty I can't wait for this serial to end. It's a weak note on which to end the series' first year of stories. 27 good episodes out of 41 gives Doctor Who's first series a quality ratio of 66 per cent.
Posted by Grant at 5:03 PM