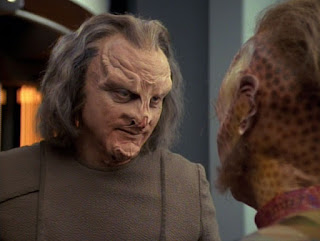 Voyager is contacted by the alien Jetrel (James Sloyan), the scientist who masterminded a weapon of mass destruction that decimated Neelix's home planet and destroyed his family. Jetrel brings bad news: Neelix (Ethan Phillips) may be suffering a degenerate illness as a result of the weapon's blast - but will Neelix accept Jetrel's help?

Ever since Voyager started with "Caretaker", Neelix has sat like an open sore on the series' face. He is a humorous character that simply is not particularly funny, and is designed and costumed to look bluntly ridiculous compared to the characters around him. What's more he has been consistently written with a repellent personality, combining hostile jealousy at anyone looking at his girlfriend Kes with a penchant for trying to be helpful and upbeat whether the crew or the audience want him to or not. Speaking of his relationship with Kes: the concept of a middle-aged alien dating a two year-old is one that should have been looked at twice during development, because it's deeply creepy. Even accepting that we're dealing with science fictional species and a two year-old Ocampan is clearly not analogous to a human the clear power imbalance between the two has always felt quite distasteful to me.

It is most welcome then to finally hit an episode of Voyager that not just focuses on Neelix but gives him dramatic material far beyond his standard remit for weak comedy. His species, Talaxians, and another, Haakonians, fought a bitter war that only ended when the Haakonians used an advanced bioweapon to commit genocide on Talaxia's moon. The Haakonian scientist Jetrel designed that bioweapon, so when he arrives on Voyager it is an enormous and traumatic shock for Neelix. While Jetrel claims he is travelling from victim to victim testing them for a potential fatal side-effect from the Haakonian weapon, Neelix does not even want to be in the same room.

It is all very well played by Ethan Phillips. While Neelix the character has been a near-unmitigated failure, Phillips has always delivered the best performances possible under those circumstances. It is actually quite sad to see him deliver such strong work here knowing he will rarely get the opportunity to do so again. Here he's required to play overlapping emotions of rage, fear, guilt and sorrow, and he does a stunning job.

James Sloyan is wonderfully ambiguous as Jetrel. He clearly has something to hide, but the problem is working out what it is. He ostensibly arrives to test and possibly cure Neelix if required, but then he becomes fascinated with Voyager's transporter system and develops a theory for using the transporters to restore the atmosphere of the Talaxian moon and making it habitable again. The episode leaves its audience hanging for quite a while before revealing Jetrel's true motives, and even then it is far from what I was expecting it to be.

The only significant criticism I have of the episode is a late revelation that Neelix never fought in the Talaxian-Haakonian War at all. He ran and hid from the authorities, and it was while he was hiding that the Haakonian weapon decimated the moon and killed his family. It instinctively feels like a shame. The earlier scenes revealed that this jovial buffoon actually had a horrifying and violent past, something that opened up huge storytelling potential for advancing Neelix and developing him throughout the series. When it is revealed he was simply a coward after all, despite Kes' fairly weak attempt to re-frame his fear as conscientious objection, those story opportunities closed up for good. It turns out Neelix is exactly what he appears to be: childish, petty, irritating and cowardly. It's a real shame.

Despite this drawback, the emotional conversations between Jetrel and Neelix - not to mention those between Jetrel and a wonderfully patient and concerned Janeway (Kathryn Mulgrew) - absolutely bring this episode over the line. This is the 14th episode of the season, and the seventh good one: the quality ratio rises back up to 50 per cent.
Posted by Grant at 6:38 PM