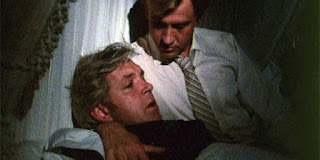 It is 25 December 1978, and time for a final Ghost Story for Christmas.

Paul (John Stride) has recently separated from his wife, and has booked himself into an isolated health spa to relax and recuperate. After he witnesses a strange phenomenon of staff feeling ice-cold to the touch - staff who mysteriously vanish shortly afterwards - Paul begins to suspect something is amiss about the vine-covered ice house deep in the spa's grounds, and the brother and sister (Geoffrey Burridge and Elizabeth Romilly) that manage the estate.

By 1978 director Lawrence Gordon Clark had left the BBC to work freelance for commercial rival ITV instead. In his place, Derek Lister directed this eighth and final short film under the Ghost Story for Christmas banner. With a script by John Bowen, who previously adapted "The Treasure of Abbot Thomas" for the series, and a modern-day setting, "The Ice House" is easily the strangest and most oddly stylised film of the six I have seen. That said, while it is definitely unusual, it is sadly not particularly good either.

It is easy to see why A Ghost Story for Christmas was discontinued after 1978. The series had kicked off in 1971 with adaptations of M.R. James ghost stories, and had a lot of success in doing so. After a one-off dabble with Charles Dickens in "The Signalman" (almost certainly the best of the films I have watched thus far), the last two films presented original stories of creeping horror without the titular ghosts that typified the series in the first place. The present-day settings robbed them of their old English atmosphere, and while both "Stigma" and "The Ice House" have their unsettling moments neither come close to capturing the supernatural strengths of the earlier works. For whatever reason the series had branched off from its original remit and ultimately lost its way.

Bowen's script is oblique and deliberately vague, with the relationship between the siblings Clovis and Jessica and the massive odorous vine never made clear. In some respects it reminded me of Bowen's earlier television play "Robin Redbreast", which was produced for Play for Today. Both works are purposefully scant on explanations and detail, and instead work to generate a sense of paranoia and dread. It worked much better in "Robin Redbreast": here the story is just a bit too slight to generate any depth.

It also suffers in the direction. Derek Lister lacks the eye for imagery than Clark had, and as a result the film feels rather flat. It lacks atmosphere. It also is not helped by relatively weak performances by the three leads. As Paul, John Stride only exhibits the needed sense of unease and growing terror in fits and starts. In too many of the other scenes he seems curiously relaxed to the point of disinterest. Elizabeth Romilly is curiously intense and insincere as Jessica, in a manner that feels unintentional rather than part of the overall tone. Geoffrey Burridge plays Clovis with a highly uncomfortable air of sexual harassment: he is very tactile and invasive when talking to Paul. He stands too close. He makes odd moments of physical contact. It is a similar tone Burridge would later use playing Dorian in the Blake's 7 episode "Rescue". He is the film's most successful element, although like Romilly he does have a tendency towards the theatrical.

A weak ending pretty much seals the deal on "The Ice House". It is the weakest of the six films I've sampled so far, and is too far off-base from the series' original style and content. The BBC would not return to the concept until 2005, when it briefly attempted a revival. That makes "The Ice House" a pretty terrible note on which to end the original series.
Posted by Grant at 5:29 PM