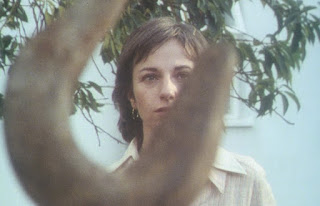 It is 29 December 1977, and time for another Ghost Story for Christmas.

A family has recently moved into a rural cottage by a large stone circle, and to accommodate a new lawn one of the giant stones is to be moved. When a work crew attempt to shift it, the stone appears to have an effect on the mother (Kate Binchy). She begins to find blood soaking through her clothes, yet she cannot find from where on her body she is bleeding.

The biggest problem with Stigma, front and centre, is that it is not a ghost story. While it is clearly a horror film, the nature of that horror is rather vague and muddled. It is also the first film in the series to be produced from an original script - by Clive Exton - and the first to be set in the present day. As a result of all of these differences Stigma feels like it has been made for the wrong show. Scheduling issues within the BBC also delayed its original broadcast to after Christmas altogether.

Lawrence Gordon Clark's direction remains solid, and certainly there are some very nicely framed shots throughout. The film was shot on location in the town of Avebury, which famously lies mostly inside a giant stone circle. The same year that Stigma was broadcast, the town also acted as the setting for the ITV children's fantasy Children of the Stones - a much more intriguing and effective drama than this.

The broadly mannered acting of Stigma is a bit of a problem. In a period setting it seems to fit relatively well, but when set at the time of broadcast it makes all of the characters immediately feel unconvincing. There is a certain sense of the theatre about it, with everyone's emotions and reactions hopelessly exaggerated.

The source of the film's horror elements also feels rather confused. It is the father of the family, Peter (regular sitcom star Peter Bowles), who orders the stone be moved. It is a pair of workmen, Richard (Christopher Blake) and Dave (John Judd) who do the moving. For some reason it is the mother, Katherine (Kate Binchy), who comes under attack and begins to bleed. The episode's conclusion reveals the stone was hiding the skeleton of a person accused of witchcraft, but it does not even indicate how and why the supernatural attack happened. Blood soaks through Katherine's skin in the same part of the ribs where the dead witch had been fatally stabbed, but we leave the story none the wiser as to why Katherine was targeted. While ambiguity often makes horror effective, in this case it feels like there is no clarity or structure to the menace at all.

One could argue there is a thematic link between Katherine's uncontrollable bleeding and menstruation, but if one was intended by Exton it is not ultimately articulated in the finished film. It is a frustrating story, and not very convincingly told. A Ghost Story for Christmas has been much, much better.
Posted by Grant at 5:04 PM