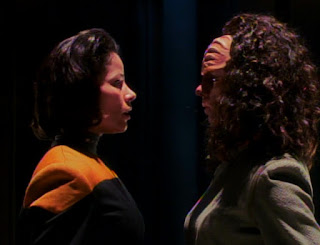 Torres (Roxann Dawson) and Paris (Robert Duncan McNeill) are captured by the Vidiians. In an attempt to cure the Phage with Klingon dna, a Vidiian scientist (Brian Markinson) uses advanced technology to split Torres in two - one version fully human, and the other fully Klingon.

Despite some neat ideas around the edges, and a solid guest performance by Brian Markinson, "Faces" never quite escapes its ridiculous and hokey premise. 'B'Elanna Torres gets split into two' is some a-grade sci-fi nonsense, and was probably unsaveable at the conceptual level. The production team, including writers Jonathan Glassner and Kenneth Biller, deserve credit for giving the story their best shot, but I strongly suspect it was not a workable premise with which to begin.

The episode understandably puts a lot of pressure on Roxann Dawson, since in addition to playing the regular Torres at the episode's end she also has to play two new characters that are distinctly different to Torres' biracial form but still need to feel as if they are aspects of the same person. She does an excellent job with the human version. The fully Klingon Torres seems like more of a struggle. A lot of that seems to be down to the writing, which portrays her as a stereotypical version of the Klingon race with plenty of rage, impatience and stupidity. By aiming for as sharp a contrast between the two halves, the script has abandoned the chance of making the Klingon Torres a believable character.

The episode aims to have a lot of conversations between the two Torres, and provide an insight into her troubled and conflicted personality. The problem is that Torres honestly is not that complicated, and attempts to dig into her dislike for her Klingon half is digging into a very shallow piece of ground. The only real scene to nail the conflict is the final one. In sickbay, the human Torres (the Klingon half died saving her) learns that she will need to be re-seeded with Klingon dna to survive. She cries: she may have come to appreciate and trust her Klingon doppelganger, but she still would rather be rid of that side of her. It goes some way to redeem the episode.

It is nice to see the Vidiians return. They are a great source of science fiction horror: aliens dying of a crippling disease who sustain their lives by harvesting the body parts of other races. There is a genuinely brilliant moment of horror towards the episode's climax when the mad scientist Sulan, keen to form a bond with Torres, murders Ensign Durst and wears his face. It's utterly deranged and horrific, so much so that it really stands out from the rest of the episode. The effect was achieved by having Brian Markinson play both roles. He does so marvellously: I did not realise it was the same actor until the moment Sulan walks in having grafted Durst's flesh to his own face.

Despite a valiant attempt to make something interesting out of a silly idea, "Faces" is ultimately derailed by that premise. It is simply a bad idea, and no amount of development or serious treatments manages to save it. This is the 13th episode of Season 1, and the seventh episode to fail. The quality ratio slips down to 46 per cent.
Posted by Grant at 5:14 PM