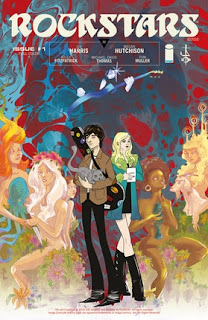 Jackie Mayer is a music enthusiast secretly investigating a series of groupie murders from the 1970s that have suddenly re-emerged in present-day Los Angeles. He soon meets music journalist Dorothy Buell, and together they begin digging around.

Rockstars is a new monthly comic from Image, writer Joe Harris (whose earlier Image title Great Pacific was pretty enjoyable) and artist Megan Hutchinson. It is clearly aiming for a sweet spot between rock music, conspiracy theories and the occult. This first issue is littered with references to classic music groups, songs and lyrics, and features strong art by Hutchinson as well as excellent colours by Kelly Fitzpatrick. For some reason, however, it simply didn't gel with me.

This is clearly a competently assembled book from a talented creative team, but it simply lacks the spark that turns a good book into a great one. Harris' script is over-reliant on narration, and there is a weird lack of urgency throughout. There is also a weird sense of "been there, done that" about the whole book. It may pick up in future issues, and certainly if a mixture of the paranormal and 1970s rock bands sounds like your thing you will find plenty to enjoy here, but ultimately I'm not sure if this book is quite good enough to stick with and find out. (3/5)

Under the cut: reviews of The Fuse, Hadrian's Wall, Poe Dameron and Spider-Man.

The fourth story arc reaches its conclusion, and with it The Fuse: a note on the final page confirms that, for the time being, this comic is wrapping up while the creative split up to undertake new projects. By and large it has been an exceptional run, with numerous outstanding issues and a regularly brilliant mixture of science fiction details and the police procedural format. This last issue is, unfortunately, not quite as sharp as most, and tends to simply wrap up story details in a straight-forward and unsurprising fashion. As a complete run, however, The Fuse has been fantastic. I'm going to miss it a great deal. (4/5)

Not only does the murder mystery at the heart of Hadrian's Wall ramp up this issue, the entire comic takes a massive and unexpected shift into a whole new direction. Rod Reis' artwork is exceptional, giving a gently realistic tone to the book and providing a dark and relatively foreboding mood. I had wondered, when this eight-issue miniseries began, how a simple murder in space could sustain 160 pages of story. Now that we're at the halfway point, I am actually wondering if 160 pages is enough room to fit this rapidly expanding thriller in. This is a great comic: intelligent, surprising, richly characterised, and beautiful at which to look. (5/5)

Poe Dameron travels to the planet Kaddak with C-3PO to track down a missing espionage droid, not knowing that the First Order's Agent Terex has arrived there as well. There's a beautiful galactic underworld setting to this issue, which really gives it a great sense of atmosphere and place. There's also some really good usage of C-3PO, not only giving him a proper role with agency and intelligence but retaining the comedic elements that are his hallmark. I was unsure about an ongoing book based around a character who had so little comparative screen time, but Poe Dameron is developing really nicely. This current storyline also suits Phil Noto's art style much better than earlier issues, and that makes a big difference. (4/5)

Miles is back from the climax of Civil War II, which does not get published for another week or so. Delays to the core title have once again played merry hell with the tie-ins, leaving this comic in the rather unfortunate position of appearing to significantly spoil another comic book before it has been published. This is a dialogue-heavy recap issue, filling in little gaps of a series I'm not reading at the expense of pushing its own story forward. That approach is never going to work with me, and it leaves me pretty resentful that I spent the money on reading a retrospective narrated account of a story I don't care to read. The well-crafted dialogue seems to be Bendis' only saving grace these days. (2/5)
Posted by Grant at 7:40 AM