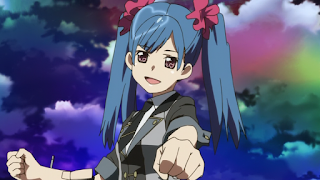 After retreating from the DES forces, the understudies make the choice to return to Lancastar and perform their first concert after all. Will Nagisa's voice return, and will AKB successfully deflect the DES assault in order to perform?

The first season of AKB0048 comes to a close with a climactic music concert, and some huge plot developments to power the story over into its second year. Over and above anything else it re-emphasises the overall themes of the series: that love and hope will conquer all, that the way to that love is through pop music and idol groups, and that nothing makes that pop music better than the addition of glowing alien spirits, lightsabers, giant robots and soap opera histrionics. This has overall been a wonderfully silly series, throwing as many elements as it can reach into a blender and then throwing it into the air like a pop culture rainbow explosion.

It is an episode for resolution and tying-up of plot threads. Chieri encourages Nagisa to sing, ending any competitiveness between them and magically restoring Nagisa's voice. Nagisa's conflict with her family over her choice to run away from Lancastar and join AKB ends with them giving their tacit support and encouragement. Takamina remains in the group rather than graduating. The story also ends where it began, on Lancastar, which gives everything a nice circular feeling.

The concert sequence is very well staged and animated, with a pace that keeps the whole episode buzzing along. The songs are well chosen and the visuals are a riot of colour and movement. The bottom line with AKB0048 has always been that it is remarkably entertaining eye candy, with bright colours and vivid designs. The climax captures all of that as well as any of the episodes before it.

At the climax, the girls' performance is so strong that they attract hundreds of glowing kirara (the strange glowing spirits), reflecting the same circumstances that led to former lead singer (aka Centre Nova) Achaan vanishing under mysterious circumstances. Thankfully no one vanishes here, but the booming voice of Sensei Sensei (the mysterious intelligence that runs AKB through Tsubasa) warns that one of the trainee singers is destined to become the next Centre Nova: the big hook that I assume will play out over the next season.

This has been a mad, remarkably silly and emotionally overwrought 13 episodes. The technique of throwing every element in the book and seeing what works has made it just too ridiculous a series for me to hate, even with a couple of rather skeezy episodes that sexualised its teen protagonists - and in one case actively excused stalking. Of those 13 episodes, I think nine of them were at least pretty good: that gives the overall season a quality ratio of 69 per cent.
Posted by Grant at 7:25 AM