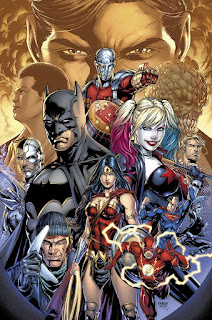 This week DC Comics launched its first post-Rebirth event series. In Justice League vs Suicide Squad, Batman brings information to the Justice League that senior US government operative Amanda Waller is running a covert strike team comprising incarcerated supervillains. In response the League sets out to shut the Squad down. When the League arrives, Waller gives her unwilling criminal soldiers an ultimatum: take down the Justice League or die. Meanwhile a third party is secretly assembling his own super-villain team.

It is such a ridiculously simple set-up, and yet it works so much better than this sort of "versus" storyline usually does. The typical problem, in say Avengers vs X-Men or Justice League vs Teen Titans - or even Batman v Superman: Dawn of Justice, is that the writer has to overcome the question of why two well-meaning, good-hearted groups or individuals would want to try and kill each other. Here it immediately makes sense: the League want to take down the Squad because the Squad comprises actual violent criminals. In return the Squad are forced to take down to League (or at least try) because Waller will kill them if they do not. It's a perfect set-up, and this issue does a great job of setting the conflict up.

Meanwhile a subplot sets up a more complex storyline that will hopefully sustain this miniseries over six issues. It features the return of a character I think for the first time since the New 52 started, and it's interesting to see which of the two angles on the character DC has chosen to take. Joshua Williamson writes a strong, fast-paced script here, and Jason Fabok's artwork is - as it usually is - excellent. (4/5)

Under the cut: reviews of Doctor Aphra, Doctor Who, 4 Kids Walk Into a Bank, Green Arrow, Joyride and Lake of Fire.

Now that we're two full issues in, it's clear that Doctor Aphra is providing a fresh and exciting angle for Marvel's hugely successful Star Wars comic books. First of all there are the characters: Marvel is demonstrating you can tell a continuing comic book set in the Star Wars universe that does not focus on characters from the films. Secondly it proves you can do a reasonably comedic book, at least a very deliberately funny one, and it works wonderfully. This book has such a great set of characters to it - I'd actually love to see them graduate one day to a feature film of their own. (4/5)

Titan's second volume of the 11th Doctor's adventures comes to a dizzying, mildly confusing end, as the Doctor faces down the Malignant with his plans in tatters and his companions mostly dead. Of course this is a Doctor Who story, so much like Batman's dire starting point in this week's Batman #13 the joy is not discovering if the hero wins the day but seeing how they do it. This has been an exceptional run for the 11th Doctor comic: much better than the first volume last year, and packed not only with respectful and intriguing continuity callbacks and guest appearances but also with a strong and accurate tone that matches the sorts of episodes the Matt Smith era of Doctor Who featured on TV. All that and a respectful final tribute to Steve Dillon (who co-created guest character Abslom Daak) too. (4/5)

After a prolonged break due to personal issues, 4 Kids Walk Into a Bank is back for a third outstanding issue. This is one of my favourite comic books for the year, combining a sort of grubby Danny Boyle-style crime story with a Spierbergian riff on The Goonies. Four kids know some criminals are about to rob a bank, they know one of their fathers is involved, and to protect that father from getting involved and arrested the kids resolve to rob the bank themselves. The dialogue sparks, the plot is unexpected, the panel layouts are sensational, and Tyler Boss' artwork is nicely stylised and effective. Track this book down and give it a read: it's tremendous stuff. (5/5)

Someone is framing Green Arrow for a series of attempted murders across Seattle, and even as Ollie struggles to discover their identity they remain one step ahead. This is a strong second installment to the "Emerald Outlaw" storyline, pushing things forward, developing the plot and packing the issue full of nice character moments and action beats. A lot of this book's current appeal comes from Otto Schmidt's excellent art and colours, which give the book a much softer look than you usually get in a superhero comic - it really makes it stand out from the competition. (4/5)

All previous issues of Joyride appear to lead to this one: the alien Kolstak, who has accompanied three human escapees through the galaxy, turns out to be an obsessed criminal desperate for vengeance against the species that murdered his family. Stopping him may involve making a huge and irreperable sacrifice. This is an issue for character relationships to finally be spoken out loud, for difficult choices to be made, and for the future of Joyride to be redirected for good. One of the reasons I loved earlier issues of Joyride was its breezy sense of fun. That sense is gone here, but the book has carefully earned this serious, tragic issue with a solid foundation of character and depth over the past year. Another one of my 2016 favourites. (5/5)

Lake of Fire comes to an apocalyptic end, as Bernadette, Hugh, Raymond and the others race to escape the aliens' lair before they are all slaughtered. This has not been the most original science fiction book on the shelves, but Fairbairn's script has included enough distinctive characters and moments to justify the book's existence. Matt Smith's artwork has been remarkably good and coupled with Fairbairn's near-monochromatic colour schemes has been a huge asset. I am keen to see what these guys do next. (4/5)
Posted by Grant at 11:02 AM