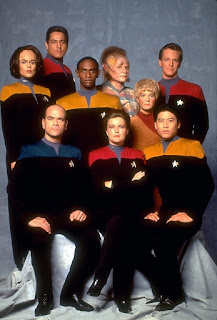 By the early 1990s Star Trek had become a hugely profitable franchise for Paramount. Star Trek: The Next Generation was the most popular drama in American syndication, and in 1993 the production team successfully expanded to produce a second series in parallel: Deep Space Nine. At the same time it was felt the cast of the original 1966 Star Trek were getting too old for the studio to continue their film franchise beyond 1991's Star Trek VI: The Undiscovered Country. The decision was made to end The Next Generation at the conclusion of its seventh season in June 1994, immediately launch a Next Generation feature film at the end of that year, and then release a replacement TV series in January 1995.

That replacement came at the perfect time since Paramount was launching its own television network, the United Paramount Network (UPN) and a Star Trek weekly series was the perfect flagship programme with which to do that. As it was ostensibly a replacement for The Next Generation Season 8 (something the entire Next Generation cast had happily agreed to do before they were shoved into movies instead), the new series had to replicate a lot of its signature features. That is, it was another Star Trek series set on a starship with a cast of humans and aliens having adventures from week to week. Tasked with developing some variation on that theme, Rick Berman, Michael Piller and Jeri Taylor created Star Trek: Voyager.

I think that requirement irreparably weakened Voyager from the get-go. The Next Generation had the advantage of a completely new setting and house style. Deep Space Nine received a darker and more cynical tone and a strikingly different setting. Looking forward, even Enterprise had some advantages including a more gritty, cinematic look and the ability to run a lot of nostalgic origins stories. It is only really Voyager that was stuck looking like a copy.

There was potential to do something different, of course. The series premise saw a Starfleet crew and a group of criminal freedom fighters forced to work together on a starship trapped 70 years from home. That is an easy method to generate conflict between characters. The problem, however, was that Paramount clearly needed and wanted Voyager to be like The Next Generation, which famously has very little conflict between its characters at all. The potential for drama is there, but other than popping in for particular episodes in fits and starts it does not really appear at all. After its first season that conflict appears even less often: they may be a disparate crew, but essentially they all get along just fine.

You can see the attempt to play things safe with much of the cast as well. Rather than rely on entirely new aliens among the regular cast we get a new Vulcan and a new Klingon. There is a handy analogue for Spock and Data as the 'alien that does not understand human ways', in the form of the holographic doctor. Other characters like Harry Kim, Chakotay and Tom Paris just seem curiously bland and safe. That blandness also affects Captain Janeway to an extent: what strength of character there is feels as if it's coming more from Kate Mulgrew's performance than anything from the writer's room.

There's also a visible tiredness to the scripts. In too many episodes there is a weird sensation of 'been there, done that'. After so many seasons in a row (nine between The Next Generation and Deep Space Nine at this point) it just feels as if the writer's room has run out of energy and ideas. There were some good episodes among the first 15, but the majority were either tired, annoying or just plain bad. All in all it's a deeply mediocre first season, of a kind Star Trek hadn't seen since The Next Generation got started.