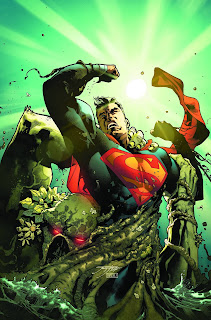 I have a rather ambivalent reaction to comic book annuals, since they usually only exist to fill in gaps in the weekly schedule when a month has a fifth week. They're longer than a usual book, sure, but in recent years that doesn't mean more story but rather more splash pages and a lower panel-per-page count. That is certainly the case with Superman Annual #1, the first DC annual (along with Batman, see below the cut) for the DC Rebirth period. The story is short, but the page count is comparatively long. In the end I feel somewhat ripped off by the US$4.99 price tag.

It must be said that Jorge Jimenez's artwork does a pretty sensational job, despite my general dislike of big splash pages and low panel counts. Superman investigates the disappearance of water from the farmland around his home, and stumbles upon Swamp Thing - who has arrived because he has sensed this new Superman is not properly connected to the world he inhabits. In true superhero fashion there is a misunderstanding and they wind up fighting. Plotwise it is pretty ordinary stuff. It does tease a bit of the slow-developing Rebirth arc, but not in any particularly intriguing way. It is a nice combination of characters, however, and does a reasonably entertaining job. I just wish DC would do a better job with their annuals than this: I want either a longer story, or a couple of shorter ones, and not just a normal length one-shot inflated by big pictures. (2/5)

Under the cut: reviews of Batman, Black Widow, Doctor Who: The Third Doctor, MASK, Ms Marvel, Saga and Seven to Eternity.

It is as if DC already anticipated my concerns with Superman Annual #1 and fixed them for Batman Annual #1. This collection of short comic stories is exactly the sort of thing I want from a comic book annual. It's got a variety of tones and styles, and a great roster of talent working on it. From the origin of Ace the Bathound to a Gotham rampage by Harley Quinn (written by Paul Dini with art by Neal Adams), it keeps up the interest throughout and tells a bunch of great little stories. Note for DC for future annuals: more of this, please. It actually justifies the higher price tag. (4/5)

Natasha teams up with the young psychic Lion to track down a trained child assassin brainwashed to kill the Vice-President. This issue is a lot more coherent and easy to follow than the last, which seemed to jump a track and present events without properly reminding the reader of what was going on. Like the better issues of this run it is solidly entertaining without being remarkable; indeed the Edmondson/Noto run that preceded this one was in my opinion a much stronger book. This issue's cover is a bit weird too: it essentially spoils the last page without having anything to do with the action in the preceding 19 pages. (3/5)

Doctor Who: The Third Doctor #3

Issue #3 of this Third Doctor miniseries begins with some delightful whimsy, builds through some very solid early 1970s pastiche, and ends on a cliffhanger reveal that I simply don't buy. I suspect some will find it wonderfully clever, however I just find it the sort of continuity mash-up that ruins these kinds of spin-off comic books. The real achievement in this book is Christopher Jones, who does a marvellous job of capturing the likenesses of the various TV actors and still giving everything an energetic, kinetic look. I really hope Titan manage to keep him around. (3/5)

In their valiant effort to transform every 1980s action figure line into a monthly comic, IDW have released MASK. The original toys - and their obligatory TV cartoon - followed a strike force that rode around in transforming super-charged vehicles. It was a kind of cross between Transformers and G.I. Joe. As a new comic, it's likely only of interest to the die-hards. It does tie into IDW's admittedly impressive shared universe of toy-based characters, including Transformers, G.I.Joe, Micronauts and ROM, but as action-based title in its own right it is fairly ordinary stuff. (2/5)

This month, on a very special Ms Marvel... There's something immediately off about this latest issue of Ms Marvel. A Hydra agent is running for Mayor, and has gerrymandered the district to maximise his chances of winning. As a result Kamala heads out with the help of her friends to make sure everybody registers to vote, and turns up on election day. It's a weird 20-page piece of preachy 'edutainment', but the weirdest part is that it's been published nearly a month after the US elections. Unexpected delays? Really poor timing? Who can say? All I know is that the issue's a lot more preachy and condescending than it is properly fun to read. (2/5)

There are some nice moments of absurd comedy in this issue, as well as some solid moments of drama and tension. While Vaughn has finally dragged most of his cast together into the one place, they're still splitting off into their own storylines. It's a nice arrangement, and the book is generally feeling stronger than it was about a year ago, but there is a sense of formula to the book now: kill a character, change a location, swap the relationships a bit, throw in a bit of shocking sex stuff. I enjoy it, but I think anybody still claiming it's one of the industry's very best books hasn't been paying attention for a year or two now. (3/5)

Just when Adam Osidis hears the Mud King's offer, the King comes under attack from a group of Mosak warriors. Much of this issue is dedicated to one big fight sequence, but it's well earned by the preceding issues and does a great job on introducing the comic's lead cast. The seven of the title are united now, and after three issues of solid set-up the story has been properly launched. This is a great fantasy comic. Rick Remender's script is good enough, but it's Jerome Opena's intricate, beautifully composed artwork that makes this such a beautiful book to read. That art is made even more attractive by Matt Hollingsworth's excellent colours. (4/5)
Posted by Grant at 11:24 PM