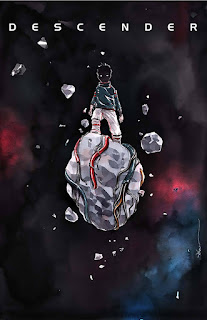 After a story arc that explored each key character's backstory, events in Descender suddenly rush back into action. Tim-21 runs for his life from a murderously jealous brother. Telsa and Quon make an escape attempt from the Machine Moon, and Andy finally makes a move on his resentful ex.

It is all told as closely to simultaneously as a comic book can manage, with each individual storyline swapping out on what is close to a panel-to-panel basis. It's a great technique, as it gives the issue a huge amount of pace and energy as it jumps from Andy to Tim-21 to Telsa in their respective situations.

Dustin Nguyen's artwork continues to fascinate me: it's loose watercolour style does not have much in the way of fine detail, and that stands in stark opposition to the bulk of science fiction comic books one tends to see on the shelves. It gives the book a unique aesthetic, and while occasionally it's frustrated here it works almost to perfection. I'm glad the pace has picked up now, as in recent issues it was becoming almost unforgivably slow. Here it's breakneck. (4/5)

Under the cut: reviews of Action Comics, Batgirl and the Birds of Prey, Daredevil, and Detective Comics.

In this third instalment of "Men of Steel" we finally get some back story regarding the alien warriors that have kidnapped Lex Luthor will full intent on killing him. It already sounds like at least one of them is being set up to kill Luthor on a false premise, but the thing is that the idea of Luthor becoming an intergalactic super-villain does actually sound possible. This current run on Action Comics is doing a great job with both Luthor and Superman. They're both iconic, but there's a nice bit of realism to them too. They feel more believable and down-to-earth than they often do. (4/5)

Batgirl and the Birds of Prey #5

The Birds of Prey finally come face to face with the villain who has been masquerading as Barbara's old identity Oracle, and it is absolutely not what I expected. It's a weird twist that plays out with an enormous amount of humour. Roge Antonio does a great job of capturing the cast's various facial expressions and emotions throughout. This is not the best superhero book DC is currently publishing, but if someone told me it was their favourite it's a choice I would definitely expect. This is a smart, amusing and action-focused superhero team book, and this issue's cliffhanger ending points to let another surprise around the corner. (4/5)

Daredevil rushes to save his captured sidekick Blindspot from the gruesome art-villain Muse - but he may be too late. This has been a fairly bleak storyline from the get-go, featuring as it does a mentally ill antagonist who kidnaps people and murders them as an artistic endeavour. This issue pushes that envelope into a moment much too violent and unpleasant for a Marvel superhero book for my tastes. Others may embrace it, but I'm personally finding this iteration of Daredevil much too downbeat and horrible for its own good. Solid art and colours by Garney and Milla isn't going to save it. (2/5)

So the seemingly tacky fake-out cliffhanger at the end of the last issue turns out to be exactly the tacky fake-out it appeared to be - quelle surprise. Thankfully the rest of the issue compensates rather well, including a great flashback conversation between Bruce and Tim and some nice showdowns between the various members of Batman's team and the members of the Victim Syndicate. It all builds to a much nicer and more honest cliffhanger than we got last issue too. All up, this is a solidly entertaining Batman comic. (3/5)