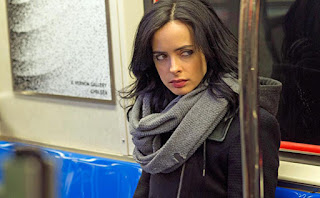 Jessica Jones (Krysten Ritter) is a troubled, cynical woman working in New York as a private investigator. When she accepts a case to track down a missing university student she discovers that the traumas of her past are returning to haunt her, and the abuser that she thought she saw die may somehow still be alive.

For the last two years Netflix and ABC Studios have been collaborating on a range of 13-episode TV dramas, each showcasing a different comic book character from Marvel Comics. Now the first two of these series, Daredevil and Jessica Jones, have been released onto home video for both non-Netflix subscribers to finally watch them and for ardent Marvel fans to add them to their growing collection of feature films and TV shows. I am not a Netflix subscriber myself (it's complicated) so I am welcoming these releases with open arms, as I have read and heard so many good things about them.

Based on the first episode, Jessica Jones absolutely lives up to the hype. It is a smart, stylish, mature and horrifyingly bleak drama about violence against women and surviving trauma, and pretty much stands apart from every other production that the so-called Marvel Cinematic Universe has generated.

This seems to be a particularly dark series. At its centre is a woman visibly suffering from post-traumatic stress, and not doing a particularly good job of recovering. She drinks too much. She takes needless risks with her health and safety. She has trouble sleeping. She impulsively has sex with the tender of a nearby public bar, and then has a mild panic attack while doing it. Krysten Ritter's performance is enormously effective. She has a hell of a task ahead of her, because she needs to make a character who is strong but brittle, aggressively defensive and yet immediately likeable. She is helped along by a smart script that carefully peppers moments of humour and levity among the darkness, but make no mistake this is by a mile the most horrific and disturbing thing Marvel has yet presented on screen.

Jones is traumatised because she suffered a prolonged assault at the hands of a man named Killgrave (David Tennant, who we briefly glimpse in flashbacks), who has the power to persuade anybody to do anything. If he tells you to get in a car, you will do it. If he tells you to smile, you will. If he tells you to have sex with him and like it, you will. It is a horrifying concept, and by a mile the most loathsome one I have seen in a television drama in a long, long time - possibly ever.

There is a wide range in how this kind of supernatural ability could be presented on screen, from the comedic to the deeply awful. Jessica Jones picks its course very boldly and directly. Jones finds Killgrave's latest victim - a girl named Hope (Erin Moriarty) in a hotel suite, where she refuses to get off the bed because Killgrave told her to stay where she was when he left. It's an oddly silly moment. Then Hope admits she has wet the bed, because she had been told to stay on it, and the moment shifts nauseatingly from the absurd to the unimaginably awful. It is not even the episode's most horrifying moment.

This is an upsetting episode, and I strongly suspect it is heralding a generally upsetting series. It should be upsetting, and I applaud the production team - led by executive producer Melissa Rosenberg - for taking such a bold and provocative direction. This is, at its heart, a series about women being raped, and for this male viewer it hits home in a powerful way because it is one of those rare Hollywood productions that actually understands what that actually means. No women here are assaulted or violated to provoke a response in their male co-stars. Things here don't have a shocking quality; instead the plot progressions have a slow, unavoidably queasy quality to them. As a viewer you are not given the opportunity to escape how awful Killgrave's actions are. Emotions are not neatly tied up at the episode's end. The story wounds, and on a certain level it scars. Significantly there are no scenes of forced sexual intercourse, because rape's never ultimately about sex but the abuse of power. Rosenberg and her team have chosen to focus on that abuse, very much to their credit. In one brief flashback we see Killgrave order Jones to 'smile', which she does automatically. For me no moment nails the tone and direction of this first episode as that one. It's pretty much the most minor of everyday male abuses of power there is: a man telling a woman that she should smile.

I can easily imagine many viewers will find Jessica Jones too provocative to enjoy. That is fair enough for them - television drama is ultimately entertainment, and if this does not entertain on any level it is clearly not for those viewers. On the other hand for viewers like me, who enjoy being pushed and provoked by a serious, intelligent, painful series, Jessica Jones - based on episode 1 at least - is a damn-near masterpiece.
Posted by Grant at 11:26 AM