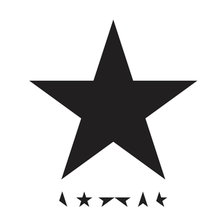 Blackstar is David Bowie's 25th studio album, released back on 8 January to widespread acclaim. Two days later, and without warning, David Bowie was dead, succumbing to a liver cancer that he had deliberately kept quiet from the public and the press.

The death of such a hugely talented and influential artist overshadowed his final work. It was impossible for me, at any rate, to listen to Blackstar without dwelling on its creator's passing. David Bowie was and remains one of my all-time favourite performance artists. His music was astonishingly good. His various styles and performing identities were groundbreaking and near-unique. The album and the artist are irrevocably united now in his death.

That is clearly a deliberate choice on Bowie's part. It is typical of an artist of his kind to not only plan his own funeral, but to transform it into an artistic event at the same time. The album was fantastic for two days, and then upon hearing it following Bowie's death the entire work took on a new significance. Lyrics suddenly meant different things. Even the term 'blackstar' refers to a form of cancerous tumour.

Opening track "Blackstar" is, to my mind, Bowie's final masterpiece. The song runs 10 minutes, broken into two distinct styles. The first was actually written for the British/French television series The Last Panthers, and its creepy, haunting tones make way in the mid-section for a much more conventional but deeply effective rock song. It's probably impossible to know for sure what Bowie's lyrics were intended to convey - his writing remains some of the most open-ended in the history of rock - but for me it reads as part funeral, part call to action. It mourns the artist's death, but challenges his followers to not just mourn him but replace him.

"'Tis Pity She Was a Whore" feels an awful lot like a late 1980s/early 1990s track, one that would have felt very much in place on Bowie's popular Black Tie White Noise album. Roaring saxophones, driving percussion and a marvellous sense of rolling out of control makes this a great rock track in a very classic Bowie tradition. The song was originally recorded for a single release in 2014, but was fully re-arranged and slightly shortened for Blackstar.

"Lazarus" was composed for Bowie's stage musical of the same name, and is a beautifully melancholic number. Whatever purpose it has within the musical, in the context of Blackstar it is the perfect follow-up to the title track. 'Look up here, I'm in heaven,' Bowie sings, 'I've got scars that can't be seen. I've got drama, can't be stolen. Everybody knows me now.' David Bowie has died, and his long fatal illness is finally exposed.

"Sue (Or in a Season of Crime)" is another former single release re-recorded for the album. It has a wonderful syncopated rhythm to it, echoing the breaks style of his earlier album Earthlings. After "Sue" it's a great contrast. On the other hand "Girl Loves Me" perhaps the only real underwhelming track on the album. It is not bad by any stretch of the imagination, but it is comparatively disappointing; a solid song where the rest of the album demanded an exceptional one.

There is a fresh, gentle quality to "Dollar Days". It has an uncomplicated sound compared to the rest of the album, which actually makes it quite a striking shift in tone. It feels like a hugely emotional song as well, and can easily be read as a tearful farewell from a dying man. 'I'm dying too,' is a lyric that repeats throughout.

If "Dollar Days" is the tearful farewell, then "I Can't Give Everything Away" is the playful reassurance that everything is going to go okay. There isn't even a sharp cut between the two songs; one simply fades into the other, and everything lightens to a much more hopeful and upbeat song. It is the perfect song for Bowie to use as his final curtain call. He has been for decades a mercurial, elusive and relatively secretive artist. 'I can't give everything away' is as perfect a description of his deliberately obfuscative identity as we are ever going to get. It is the last goodbye from a musical genius, who will be much missed.

There will be more Bowie songs to come, as they slowly leak out of his archives. His regular collaborator Tony Visconti has confirmed there are vocal tracks recorded waiting for music to be arranged beneath them. Brian Eno has expressed a desire to finally complete the Outside follow-up that he and Bowie abandoned two decades ago. Even Bowie's widely bootlegged lost album Toy might finally get an official release. From the man himself, however, this is a purposeful, wonderful and effectively perfect final bow.