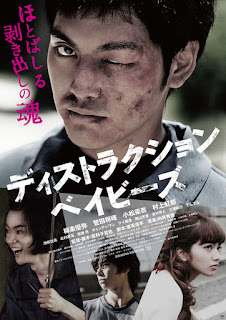 Shota (Nijiro Murakami) lives alone in a tent in the small Japanese town of Mitsuhama. His older brother Taira (Yuya Yagira) is on the streets of the nearby city Matsuyama. Taira is fixated on having fistfights. If he sees a target on the street who looks as if they can present a challenge, he simply walks up and starts punching them in the face. While Shota sets out to find Taira, Taira falls in with Yuya (Masaki Suda): a local teenager who joins Taira's violent excursion for a cheap thrill.

Destruction Babies is cold and violent journey to a very bleak place. I have a fairly high threshold for on-screen violence, however Destruction Babies repeatedly made me flinch. It is not an outlandish action film replete with machine gun fire, sword fights or elaborate martial arts sequences. Instead it is a quite disturbed drama about the failure of Japanese society. Taira is not a skilled fighter; he simply has a high threshold for pain. As he impulsively dives into random street brawls - and I cannot exaggerate how many times in one movie this happens - they are not clean, stylised affairs. They are messy, brutal assaults. Noses break. Skin splits. Faces bruise like ripe fruit. It is a profoundly effective exercise in film-making, but it tells a story many viewers will simply not want to hear.

That is absolutely okay: cinema is a broad medium with room for all kinds of tones, aesthetics and genres. In the context of Japanese cinema, Destruction Babies fills a comfortable niche of challenging and violent films that tend to attract a dedicated cult audience. For viewers already keen on the likes of Takashi Miike and particularly Tetsuo writer/director Shinya Tsukamoto, I suspect Destruction Babies will hold plenty of appeal.

Way back in the 1950s Japanese cinema briefly experimented with 'sun tribe' films: teen dramas based around young Japanese people listening to jazz (the Japanese teen rebel equivalent to rock'n'roll), hanging out at the beach, and exploring a more permissive attitude to sex than their parents had ever experienced. The films were controversial enough for the Japanese censors to shut them down, but in 1960 the Nikkatsu film studio returned to the territory with Koreyoshi Kurohara's The Warped Ones. This film revisited the sun tribe films through a much more unpleasant lens, with characters committing random acts of violence including sexual assault and presenting an overtly antisocial attitude to traditional Japanese values. The Warped Ones by no means condoned its characters' behaviour, but it did observe them without judging or turning away.

There is a lot of The Warped Ones in Destruction Babies. Indeed there is a heavy influence from 1960s Japanese cinema in general. In one moment Taira - on a crime spree with Yuya - puts on a pair of black sunglasses and looks to the camera. In that moment he is a clear doppelganger of action star Jo Shishido in Seijun Suzuki's cult classic Branded to Kill. He bears such an obvious resemblance that it can't not be intentional. I think Destruction Babies also reflects many of the violent Nikkatsu films of the time: it portrays shocking criminal behaviour without either glorifying it or condemning it. Bad things simply happen, because the youth the film depicts are so disconnected from the society that raised them.

There is a sharp contrast between Taira and Yuya. The former just engages in pure blunt violence. Perhaps he will beat someone senseless. Perhaps his own face will be mashed to a pulp. The result does not actually seem to matter to him, as it is the act of violence that helps him feel alive and connected to the world. Yuya visibly misunderstands this. He takes Taira's violence and turns it into a genuine anti-social rampage. When he first attempts to emulate Taira, his target is not another man but a schoolgirl. He spontaneously decides to kidnap Nana (Nana Komatsu), a bar hostess working for local yakuza, and after a period of emotional torture and intimidation tricks her into running over a beaten-up farmer, killing him in the process. It is significant that Yuya pays a price for his criminal behaviour, while Taira does not. When Taira returns home at the film's climax, it is on the night of a local coming-of-age festival where men climb upon mobile temple replicas and attempt to shove each other off: even in this codified traditional space, adulthood means challenging and fighting one another.

The performances are generally very strong, particularly Yuya Yagira who plays Taira as an indecipherable force of nature. I don't honestly think it is possible to fully understand why he does what he does. I don't think that working it out would be the point of the film anyway.

This is the fourth film for director Tetsuya Mariko, although it is his first in almost six years. It has such a blunt and vivid attitude and aesthetic that I really hope to see those earlier films. With any luck he will be able to direct more films sooner rather than later, since he appears to be a creative voice to whom we should pay attention.
Posted by Grant at 9:04 AM