Doctor Who: "The Hungry Earth" 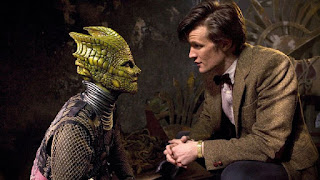 The Doctor (Matt Smith) aims for Rio and winds up in 2020 Wales. A nearby scientific project is drilling more than 20 kilometres beneath the Earth's surface. Something has woken up beneath the ground. Amy (Karen Gillan) is dragged below, and before the Doctor and Rory (Arthur Darvill) can mount a rescue the drilling project and its crew come under attack from Silurian warriors.

"The Hungry Earth" is the first part of a two-part serial produced for Doctor Who's fifth season: the first for executive producer Steven Moffat and star Matt Smith. The script is by Chris Chibnall, a writer who had previously written the fairly unpopular Season 3 episode "42" as well as produced the spin-off series Torchwood. Chibnall, who since the broadcast of this episode has gone on to become one of Britain's most acclaimed television writers via the crime drama Broadchurch, is also the next executive producer of Doctor Who and takes over the series from Season 11 in 2018. That makes "The Hungry Earth" a fascinating episode to watch, since it might provide some idea of what the series under Chibnall will be like.

The most striking part of "The Hungry Earth" is just how old-fashioned it is. The Doctor arrives at a scientific base. That base soon falls under siege from an alien foe. The Doctor wants to negotiate but both the aliens and the humans want to fight. He uses gadgets and technology to defend himself and others, and he uses talking as a weapon instead of a gun. Remove Matt Smith, Amy and Rory and drop in Tom Baker, Sarah Jane and Harry, and you'd barely need to change a word. It even ends on a cliffhanger. That's a promising thing for a Chibnall Doctor Who, because the one thing I think the series desperately needs going forwards is less emotional character interplay and more straight-forward science fiction adventure. That's pretty much what we get here.

The episode plays a nice variation on the original "Silurians" serial from 1970, and calls back to it without making new viewers feel confused or left behind. The Silurians themselves feature a new design that is admittedly a lot less effective than the completely alien reptiles seen back in their original serial. At the same time it allows for more of them to appear in the serial: it's an understandable comprise, no matter how regrettable for the nostalgic fan. Neve McIntosh is impressive as the Silurian warrior Alaya, coming across as someone from a distinctly different culture and not simply an English woman wearing a rubber mask.

Arthur Darvill settles in nicely in Rory's new position as companion, taking a bit of a lead early on and playing solid support to the Doctor. Amy is separated from both of them fairly early on, and her scenes down in the Silurian colony give the episode a nice horrific edge to ratchet up the tension. The guest cast are generally strong, particularly Meera Syal as geologist Dr Nasreen Chaudhry. She makes such a likeable impression that I'm a little sad her character has never returned.

This is not the sort of Doctor Who episode that anyone is going to claim as an all-out classic, but it is a hugely enjoyable one. It's rock solid science fiction entertainment, and yet another strong outing for Season 5. Eight episodes in, and seven of them have been good. I had honestly forgotten just how enjoyable Season 5 was. The quality ratio rises to 88 per cent.
Posted by Grant at 3:46 PM