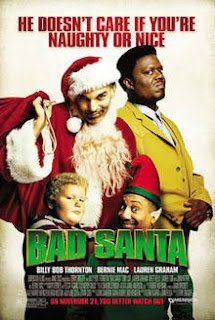 Willie (Billy Bob Thornton) is an alcoholic safe-cracker and thief. Each Christmas he and his accomplice Marcus (Tony Cox) obtain work at a suburban shopping centre as Santa Claus and elf, use the opportunity to case the centre's security, and then steal its takings on Christmas Eve. When working a job in Phoenix, Arizona, Willie finds himself tied up in the affairs of a credulous young boy (Brett Kelly) that threaten to derail the entire operation.

I imagine a lot of people tried Bad Santa and hated it, and that's fair enough: the film's roughest elements are clearly more than a lot of people will find entertaining. That said, I personally adore the film because underneath that superficial layer of poor behaviour there is a heartwarming story about a bad man learning to become a better person.

The film works as well as it does partly because the cast commit to it so well. Billy Bob Thornton is pitch-perfect as Willie, managing to simultaneously engage in terrible behaviour while also convincing the audience of the better, nicer man inside just struggling to get out. It is a nice touch that he never really does emerge as a properly decent human being; even in his best moments he is still rough as all hell.

Tony Cox and Lauren Tom are great as Marcus and Lois, Willie's married couple accomplices whose obsession with their ill-gotten loots surpasses any other considerations. They present a strong contrast to Willie as the film goes on. He is a bad person who struggles to be good. They are simply bad people. The late John Ritter creates the most wonderfully awkward of characters in the shopping centre manager, who fusses over the correct term for little people so much that he inadvertently sounds more offensive than if he'd simply insulted them. This was his final film role. Bernie Mac is head-scratchingly weird as the centre's security chief, who eats four mangoes at a time at his desk and seems obsessed with chain-smoking, drinking Metamucil and having pedicures. As the naive child that latches leech-like onto Thornton's Santa (his name would spoil a great joke) Brett Kelly is hilarious. Lauren Graham is under-used as Willie's new girlfriend Sue, but effective when the film allows her to be.

The bleak, mean-spirited humour is great. The film's director, Terry Zwigoff, has a well-rehearsed ability to be off-kilter and perverse, primarily through his exceptional 1994 documentary Crumb and his 2001 cult hit Ghost World. Taste is broadly subjective, and comedy particularly so, but for people who like a film that takes an edge and makes fun of unpleasant situations and people Bad Santa is absolutely one of the best ones.

And underneath it all, there's that proper Christmas story. Willie hates everyone, but cannot help but start caring about this stupid, weirdly obsessive child. It gives him a moral centre that he never used to have. It makes him finally begin doing the right things in life - often in the wrong way, but to an extent it's the thought that counts. It may be mean, gross and wildly offensive to many, but Bad Santa is ultimately about a Grinch's heart growing two sizes. It is, as I've said above, one of my absolute favourite movies for the festive season: it hurls abuse at Christmas and kind of celebrates it too.
Posted by Grant at 7:23 AM