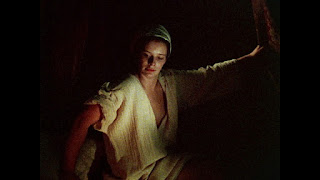 It is 23 December 1979, and time to watch Schalcken the Painter.

In 17th century Leiden the apprentice painter Godfried Schalcken (Jeremy Clyde) falls in love with his master's niece Rose (Cheryl Kennedy). Before he can marry her she is spirited away by the gaunt and mysterious Vanderhausen (Justin Jones), sparking off a mystery involving the supernatural, horrifying apparitions and possibly even Death himself.

Schalcken the Painter is yet another Christmas-time horror film produced by the BBC. In 1979, seeing that the long-running annual series A Ghost Story for Christmas had been cancelled, producer/director Leslie Megahey took the opportunity to provide a replacement. This 70-minute period thriller, which acts as a fine replacement for the cancelled series, created a minor controversy within the BBC at the time. Megahey had recently assumed control of the documentary series Omnibus, and allocated part of its budget to this film on the grounds that - as it focused on the real-life Schalcken as well as his teacher Gerrit Dou - it could tenuously qualify as docudrama. As it is a fictional ghost story, one adapted from a Sheridan Le Fanu short story, it makes for terrible docudrama. As yet another supernatural chiller for the Christmas season, it's rather wonderful.

The most striking aspect of the film is likely the manner in which it is shot, with Megahey deliberately echoing the real-life Schalcken art works and general style from one shot to the next. The deep blacks and dim, orange candlelight gives the film a slightly claustrophobic feel, one that emphasises the moments of horror when they occur. This technique has been used in films since, including Peter Webber's The Girl with a Pearl Earring and Peter Greenaway's Nightwatching, but of course Schalcken the Painter pre-dates both of those films by more than twenty years.

Jeremy Clyde makes for a fine Schalcken: awkward and cowardly in youth, and then dismissive and arrogant in middle age. Maurice Denham is a suitably vain and cantankerous Dou. Justin Jones is stunningly morbid and creepy as the repellent and ghostly Vanderhausen, who relies on Dou's greed to secure Dou's niece Rose (Cheryl Kennedy) as his bride. In terms of visual appearance, the combination of Jones' gaunt lined face and greenish make-up makes him a genuinely horrific spectre to behold. As Rose Cheryl Kennedy loses out somewhat, as it is her character's absence that drives the film's second half more than her appearance in the first. She is good in an admittedly limited role.

There is a wonderful sense of rising dread to the film, as Schalcken's fears slowly grow over Rose's fate, and circumstance and rumour soon drive him to consider the most supernatural of explanations. Megahey does a great job of building the tension, drip-feeding the audience both information and scares with a well-considered and measured pace.

If there is a significant flaw it is Charles Gray's overly descriptive and somewhat intrusive narration. Voiceover and narration rarely feels necessary in narrative cinema, and here it certainly feels as if the film would be stronger without it. It is possible the only reason it is there at all is to justify Schalcken's status as a docudrama. As a one-off replacement, however, for the sadly cancelled A Ghost Story for Christmas, Schalcken the Painter is a most worthy substitute.

Schalcken the Painter was only broadcast once on the BBC, and never directly received a home video release. It has come to home video as a dual bluray/DVD release courtesy of the British Film Institute's Flipside range, which seeks to recover and showcase lost works of British filmmaking. It is a worthy and most welcome addition to that range.
Posted by Grant at 9:10 AM