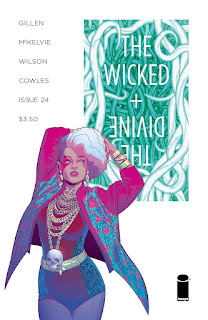 Okay, so every 90 years twelve gods are reborn in the bodies of young twentysomethings, who then boast supernatural powers and draw huge crowds of followers before dying after two years. We used to think it was some kind of natural order thing, but it turns out an immortal named Ananke - who ostensibly wakes and guides them - has actually been killing them to avert 'the Great Darkness'. Now one of these young gods, Persephone, has stone-cold murdered Ananke, leaving the future for the surviving gods (down to 10) very much unknown.

It's a nice and ridiculously blunt bit of symbolism to begin this new story arc on New Year's Day. The old reign under Ananke is gone, and quite frankly anything could happen going forwards. That makes it a pretty exciting time to be a Wicked + the Divine (or WicDiv) reader. It's a particularly uncertain future for Laura - now reborn as Persephone. She was our protagonist, but can we even really trust her any more?

Jamie McKelvie's subtle, expressive art is so good at capturing emotion and character. He is one of my all-time favourite comic book artists. Kieron Gillen's script is smart and beautifully paced. The ideas are phenomenal. I found WicDiv was struggling a little about a year ago but this issue feels like a phenomenal return to form. (5/5)

Under the cut: reviews of Aquaman, The Electric Sublime, and Faith.

After a lengthy lead-up "The Deluge" finally begins, as Black Manta's forces attack the United States coast in the guise of Atlantean warriors. This forces the USA to declare war on Atlantis, and giving Aquaman a serious problem. It all rings true, partly because it follows up on actual armed conflict between the undersea and surface worlds all the way back in "Throne of Atlantis" and partly because the lead-up to this has been so meticulous and well-considered. Briones' artwork is strong, as are Eltaeb's bright colours. (4/5)

I feel as if there is an entire genre of comic book these days - a lot of them via Image - that can essentially be classified as "15 years ago this would have been a Vertigo book". DC Vertigo used to have such a distinctive, appealing style to their long-form series that made them pretty much the best mature readers titles on the market. Now those books are all over the place thanks to a more competitive industry and better deals for creators. The Electric Sublime is absolutely one of these books, following an insane artist who travels through illusory art-based realities and fights art criminals. It is surreal, distinctive, and this issue features not only a lot of plot threads pulling neatly together but an exceptional journey for Arthur and Manny inside Munch's The Scream of Nature. I am seriously loving this book. (5/5)

Faith seems to continue flying under the radar while telling smart, funny superhero stories with a distinctive and strong female protagonist. This issue sees Faith tracking down and challenging a failed teen starlet turned super-villain in the hope of discovering where her powers came from. This is solid, entertaining capes action, peppered with pop culture references (Faith is a geek) and a very warm, upbeat tone. I am not completely sold by Meghan Hetrick's artwork, however, which feels a bit too sketchy and rough to fully convince me. (3/5)
Posted by Grant at 11:03 PM