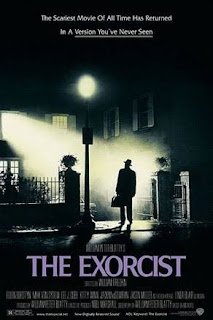 Regan McNeill (Linda Blair) is a bright-faced pre-teen living in Georgetown when her bed begins moving on its own accord. Soon Regan is afflicted by seizures and delusions, and disturbing changes in behaviour. When medical science cannot provide an explanation, Regan's mother Chris (Ellen Burstyn) resorts to calling in the priest Father Damien Karras (Jason Miller) and he in turn must rely on the exorcist Father Lancaster Merrin (Max Von Sydow).

The Exorcist is a widely regarded masterpiece of cinema, and one that is regularly cited as the greatest horror movie ever made. It was the first horror film to be nominated for a Best Picture Academy Award. Entertainment Weekly and Time Out both ranked it as the scariest film ever made.

Here's the thing though: The Exorcist isn't really a horror film. Don't get me wrong, it has a few nice scary moments. It does feature supernatural content and themes. At the same time, however, it is also a masterful drama about how a priest almost lost his faith until a demon forces him to take a stand and fight for his beliefs.

Of course this where genre labels tend to fall down, since most movies will straddle multiple genres whether romance and drama, or horror and science fiction, or comedy and musical. The Exorcist exists quite comfortably as both a shocking domestic horror movie and as an absorbing and mature character drama. Part of director William Friedkin's skill is balancing those two halves so well that it does work perfectly in each genre.

The supernatural elements of the film jump out because Friedkin places them in such banal surrounds. Obviously the setting was established by William Peter Blatty's excellent screenplay, but Friedkin emphasises the ordinary nature of the Georgetown setting by using a very simple, almost documentary-like shooting style. Chris McNeill may have a glamorous job as an actress and a relatively wealthy lifestyle, but when her daughter begins to suffer and experience strange phenomena she very rapidly descends to nothing more than an upset and protective mother.

Ellen Burstyn gives a strong performance here, as do both Sydow and Blair, but to my mind the real star of the film is Jason Miller as Father Damien. He plays so much emotion through his eyes and via well-considered hesitations. Damien is a complex character with a lot of inner contradictions, and it's remarkable how real Miller makes him. He begins the film in the middle of a crisis of faith. He is gradually becoming convinced that he should quit the priesthood. He spends half of his time caring a frail mother with more than a little exhaustion and resentment. When she later dies, his faith in God and his life is challenged still further. Ultimately I find the film is, more than anything else, the story of Damien rediscovering his faith in God and the overwhelming importance of upholding that faith.

One of the under-appreciated stars of the film is make-up artist Dick Smith, who not only developed all of the prosthetic effects for the possessed Regan, but also effectively aged Max Von Sydow to look utterly convincing as an old man. So effective is that make-up that today, more than 40 years later, the real-life Sydow looks as if he hasn't aged a day since he played Lancaster Merrin.

And what an iconic character Father Merrin is. There is no time given over in the screenplay to develop or elaborate upon his character. Prior to the film's climax he only appears in a prologue sequence set in Iraq. The characterisation, depth and gravitas comes almost entirely from Sydow's performance. It is why it was so critical for the film to give this role to such an accomplished and talented actor, since he is required to establish and sell the character in the most efficient and clear manner possible. He makes an enormous impression here, so much so that it is easy to forget just how brief his appearance in the film actually is.

This is one of those rare perfect films that does exactly what it intends to do, and does so in a faultless and astonishingly accomplished manner. There is a director's cut available, which adds 11 additional minutes of footage, but to my mind none of those additions were needed. The original still stands as the best version there is.
Posted by Grant at 9:08 AM