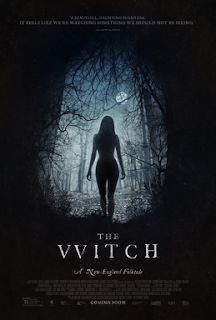 New England, 1630. A puritan farmer named William (Ralph Ineson) and his family are banished from their village and build a new home on the edge of the forest. That winter, their infant son Samuel is snatched from in front of their eldest daughter Thomasin (Anya Taylor-Joy). Her younger twin siblings begin to talk with the farm's black goat. Her brother Caleb (Harvey Scrimshaw) goes missing in the woods. As the paranoia rises, the family begins to turn on one another.

The Witch landed at the 2015 Sundance Film Festival with an explosion of critical acclaim and gaining a lucrative international distribution deal. That early success may hamper it with audiences, since it is far from the edge-of-your-seat period horror that its marketing actively suggested. Instead this is a slow, oddly sedate film that sits rather uncomfortably between supernatural horror, period drama and paranoid thriller. Very patient viewers may find it to be exceptional stuff. Personally I found it too frustrating to sufficiently work.

The premise seems rock-solid. A fearful and deeply religious family are effectively trapped in the middle on nowhere. Their crop of corn has failed, leaving them to a winter of slow starvation. Things are going horribly wrong. There might be a witch in the woods casting spells on them. Much of it might simply be misfortune. Once the suspicion is raised that one of the family is in league with the devil, you know things are not going to end happily.

The film's problem is that writer/director Robert Eggers applies much too slow a burn for this paranoid nightmare to work. Tensions are raised, and then too long is taken before the next shock for that tension to be maintained. The end result is a 90 minute film that feels like a full two hours. All too often it commits the worst sin possible for a horror movie: it gets boring.

This is not the fault of the cast, who all give remarkably strong and believable performances. They have a fairly difficult task. H.P. Hartley's famous quote "the past is a foreign country" is very much in evidence here. There is little in the lives and mind-sets of 17th century puritan zealots to which a contemporary non-religious audience can relate. Despite this it is fairly easy to empathise with this ill-fated family, or perhaps more accurately to sympathise with them. We see them make mistakes that make sense to them, but to us are sadly foolish superstition. Anya Taylor Joy is particularly strong, as is Harvey Scrimshaw. The thick period accents are something of a problem: I am all for historical accuracy, but when it means one line in three gets lost it is perhaps reasonable to provide a more contemporary dialect.

There is a lot of great material embedded into the film. It successfully pulls the audience into a 17th century deeply religious mindset. It has the occasional moment of genuinely effective horror - the final scene, which I shall not spoil, is particularly unsettling. It is beautifully shot and scored, by Jarin Blaschke and Mark Korven respectively. I do think Robert Eggers has a hugely promising directorial career ahead of him, but for me personally this first film was a little too slow and stop-start to properly fulfil its potential.
Posted by Grant at 11:30 PM