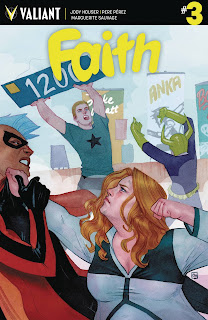 'Our hero goes to Comic-Con' is a pretty great pitch for a superhero comic, and it's one that Faith #3 uses to tremendously entertaining effect. Faith has decided to take time out from fighting crime and takes her naive boyfriend Archer to a comic convention. They're in cosplay, they're trawling Artist's Alley for autographs, and they're buying pop culture memorabilia in the Trader's Hall. Of course crime is not far away, and before long they're chasing a guy dressed as Danger Mouse (sorry, Murder Mouse, but copyright evasion aside he's dressed like Danger Mouse) through the convention on the trail of stolen good.

The tone is just a delight. Faith is a superhero aware on a pop culture level of superheroes, and that opens up a whole range of possibilities for how she interacts with her adventures. Archer of course is a sheltered young man without a solid handle on any culture, which makes him pretty much the perfect counterpart. Throughout the issue a series of small text boxes offer hints and tips on how best to enjoy a comic convention, as well as how to sensible behave at one. It is really well pitched and funny to read - as are all the little pop culture references and comic creator cameos throughout.

Faith is a great comic book with a unique angle on a well-worn genre. It focuses more on the character than on her superhero adventures. After all, her superhero identity is Zephyr, but the book is called Faith. It's like DC published a Superman book called Clark. I am somewhat surprised Faith isn't more popular than it is - I know a lot of people who would probably really like this. (4/5)

Under the cut: reviews of Briggs Land, Doctor Who and Doom Patrol.

When her separatist, racist, domestic terrorist husband is in Federal custody, Grace Briggs decides to take control of his family and community - but not without a fight from her incarcerated husband and those that still follow him. This is gritty American crime, with strong characters and nicely realistic artwork. The threat of violence hangs over everything, since this is a community of anti-government 'sovereign citizens'. The atmosphere is one of its greatest assets, and two issues in it seems another winning series from Brian Wood. (4/5)

Doctor Who: The Third Doctor #1

Gerard Way is probably most famous for being the co-founder and lead singer of popular pop group My Chemical Romance, but he has also developed a secondary career as a comic book writer. He is a huge fan of Grant Morrison, and in many of his writing seems to aspire to repeat him. It's no surprise, then, to see him now revive the book that probably marked Morrison's first great hit: Doom Patrol. DC has attempted to revive this title many times before, and it has always failed. This latest version is as direct a follow-up and tribute to Morrison's run that you could expect to ever find. It's surreal, fairly nonsensical and is kind of all over the place. Nick Derington's art is great, as are Tamra Bonvillain's colours. Way's script is essentially a tribute act: it's incredibly well crafted and likeable, but does feel an awful lot like a copy. DC has a lot of faith in him though: this is the first in an entire imprint of similar old-school Vertigo-like riffs. The next off the ranks is Shade: The Changing Girl. (4/5)
Posted by Grant at 10:26 PM