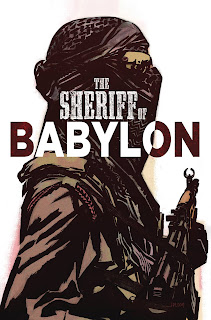 The Sheriff of Babylon nears it climax as Sofia and Nassir come face to face with the terrorist Abu Rahim. It is another issue dominated by conversation, yet not only is it great conversation it is told it spectacular visual terms. Tom King and Mitch Gerads are to my mind America's comic book team of the year: no one else is telling graphic narratives this effectively.

The thing that really impresses me with this book is how it handles the US invasion and occupation of Iraq in such a fashion that it gives the Iraqi people a voice. You could perhaps argue that it is co-opting someone else's story - a tale of Iraq should perhaps by told by an Iraqi writer - but it feels like a lot of the comic has been pulled from King's own experience in Iraq before making his unusual career shift from the CIA to DC Comics. There is a sense of authenticity here, and complexity: the people of Iraq are not a monoculture. The actions of Saddam Hussein and the USA had a terrible effect on nearly everyone.

The characters are pitch-perfect. The story is intelligent, complex and gripping. The politics are smart and provocative. The artwork is gritty and realistic, and those panel layout and transitions really are masterful. This really is the best comic book of 2016. (5/5)

Under the cut: reviews of Daredevil, Doctor Strange, and Poe Dameron.

Daredevil and Blindspot have discovered a horrifying mural painted in human blood. Not just any blood either, but blood from more than 100 missing people. While in his day job Matt Murdock is tasked with preventing the painting from being paraded in front of the public, by night he is desperate to track down the killer before they strike again. This is a particularly dark storyline, which seems to be the direction in which Daredevil is headed now, but to its credit it is a well written and nicely illustrated one. There's plenty of atmosphere. My only real criticism is that somehow the Inhumans are involved: Marvel has been going for broke for a while now trying to make the Inhumans a central and popular part of the Marvel Universe - mainly so they can utilise them in their feature films in place of the Fox-controlled X-Men. I still don't think it's going to take. It's irritating watching Marvel try. (3/5)

Dr Strange may have defeated the Empirakul, but now he's the Sorceror Surpreme of a world with hardly any magic left to it. This issue is a nicely paced epilogue to "The Last Days of Magic" that showcases just how much has been lost, while also providing a flashback to Strange's origins that seems set to push the book forward into a new story arc next month. The transition is smooth and very readable, and the issue benefits particularly from Kevin Nowlan and Leonardo Romero's artwork. I never felt Chris Bachalo's art was working: it was too busy and complicated. This is much, much more readable. (4/5)

While trying to break a Hutt out of a prison colony, Poe and his team find themselves caught in a violent riot. Their only hope of escape lies in Poe's astromech droid BB-8 - so you know this is going to be a pretty entertaining issue. There are some great twists and turns in this issue, and a huge amount of action. I haven't been as enamoured with Poe Dameron as I have with some of Marvel's other Star Wars comics, but here it all seems to click. It feels like Star Wars, and the cast of characters is really beginning to grow on me. (4/5)
Posted by Grant at 11:35 AM