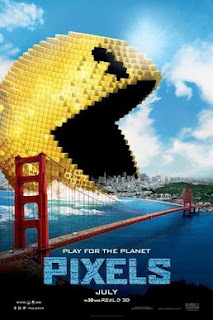 Pixels is a very bad movie, and you should probably avoid ever watching it. Really: despite a funny premise, and despite being based on a pretty great short film, it is a dreadful waste of your time and money. I watch these things because if they're good I can enjoy them, and if they're bad I can get a review out of them. Unless you're looking for a terrible movie to review as well, you really can pass Pixels by.

The film follows child videogame champion turned electronics installation technician Sam Brenner (Adam Sandler), whose childhood friend Will (Kevin James) grew up to become President of the United States. When aliens arrive on Earth and challenge the planet to a war based around 1980s videogames, Will enlists Sam and some other videogame enthusiasts to help save the day and protect the human race.

Or something like that. To be honest the plot is irrelevant, because there's a good chance that by the time it develops you will have lost the will to live.

And here's the thing: it's easy to pick on Adam Sandler movies. Critics hate them - Punchdrunk Love not included - because they are populist, lowbrow entertainment, and critics generally have more sophisticated and complex tastes than that. Sandler is low-hanging fruit: if critics have to sit through one of his films, by God they are going to at least get some satisfaction in tearing that film to pieces. The thing is I actually enjoy a lot of Sandler's films. Ask me about Happy Gilmore, or The Wedding Singer, or Big Daddy, and I will have some relatively appreciative things to say. I also think that, when he puts his mind to it, Sandler is a reasonably good actor. Punchdrunk Love remains his stand-out film, but even in an otherwise middling film like Men, Women and Children he's proved himself to be a solid actor when he cares.

A lack of caring is one of the things that kills Pixels. It used to be that there were two kinds of Adam Sandler character. You had angry Sandler, a character I actually had a lot of time for, and whose films I tended to enjoy to a certain extent, and you had idiot Sandler, a character whose persona I found akin to fingernails on a blackboard. These days you can also add bored Sandler: a third persona where Sandler the actor knows that what he is making is not as good as he could make it, but he's essentially given up and taken the pay cheque. You can see bored Sandler in his eyes. They silently scream at the viewers from behind the scenes, begging for their forgiveness. 'I know,' they admit, 'I know. Forgive me. I have a Hollywood lifestyle to maintain, but I am just so tired. I don't have it in me any more, but they keep offering me money.'

Sandler doesn't get much assistance coming from Kevin James, a sitcom star whose inexplicable ability to continue scoring feature rules stands in sharp contrast to his weird lack of comic ability. Co-star Josh Gad tries his best, but he's saddled with both a tremendously unfunny character and the voice of Olaf the snowman from Frozen. Michelle Monaghan is supposed to be playing an intelligent, pro-active military officer, but really she is only in the movie to look pretty and to fall in love with Sandler's character. Sandler's eyes scream boredom and apologies. Monaghan's scream with a desire to fire her agent, and gnaw off her own arm to get out of the shoot.

The only actor who genuinely appears to be having fun is Peter Dinklage as the over-confident and brash videogames champion Eddie Plant, who is a thinly-veiled parody of real-life Donkey Kong champion Billy Mitchell. Dinklage throws himself into the part with the enthusiasm of a man that knows he is in a piece of garbage and figures he can therefore say and does as he likes. It is a long-running tradition of quality actors in terrible films, and while he is not quite up to the standard of Jeremy Irons in Dungeons & Dragons or Richard E. Grant and Sandra Bernhardt in Hudson Hawk, he is still the one thing saving the film from becoming a total waste of time.

In terms of production, the film is competent without excelling in any way. Director Chris Columbus makes a habit of this. He clearly knows how to point a camera, but he lacks an original bone in his body and he cannot recognise bad writing. It is telling that his two Harry Potter films were the worst of the eight, and while he has directed a couple of fun movies - Adventures in Babysitting remains a personal favourite - his resume is littered with the Hollywood dead: Bicentennial Man, Nine Months, Stepmom and Percy Jackson and the Olympians are all bad films, and yet Hollywood studios keep re-employing him again and again.

To the film's mild credit, some of the jokes work. Many of them do not. Many of the good jokes are ruined by subsequent riffs and expansions on that joke. Critically, what jokes that do work are spaced so widely apart that the film simply swallows them beneath long stretches of tedious boredom. There is a good and rather fun idea at the heart of Pixels, but the production never properly finds it - and now it can't go looking for it again, because the concept has been wasted.
Posted by Grant at 5:11 PM