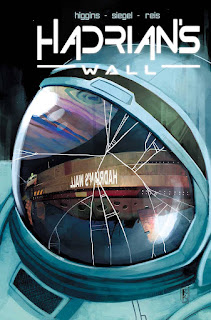 An astronaut has been murdered on Hadrian's Wall, a deep space exploratory vessel. A detective named Simon Moore is dispatched to investigate, although he has a personal connection to the victim - a man who shot Moore four times and then married his ex-wife.

There is a very retro vibe to Hadrian's Wall, one emphasised by Rod Reis' realistic, painterly artwork. It feels like a feature film from the 1970s or early 1980s. The character designs and hairstyles seem to emphasise it. It's a visually beautiful book, with a nice sense of pace and strong panel layouts. It's a tremendously easy read. Storywise it does seem to rely on genre conventions and stereotypes to an extent, but it seems like that is to give it structure. There is already some interesting character development going on, and some nice science fiction detail and world-building going on in the background.

I have been enthusing for a couple of years now about all of the great science fiction Image has been publishing - particularly science fiction crime stories - and Hadrian's Wall is yet another feather in the publisher's cap. As a science fiction enthusiast it pleases me immensely that American comics are embracing the genre so enthusiastically. The next step is to get science fiction fans to actually read them all: there's some great stuff here, and it often gets overlooked. (4/5)

Under the cut: reviews of Batgirl and the Birds of Prey, Doctor Who: Supremacy of the Cybermen, and Gotham Academy: Second Semester.

Batgirl and the Birds of Prey #2

It feels great to read a comic book that features three female vigilantes whose characters are defined not by their gender but by their abilities. It's great to see their characters develop and their interpersonal relationships evolve as they work together to fight a common foe. It's great to read snappy and smart dialogue. It's wonderful to see how the book is situated in the broader context of the Batman titles, but even when Batman turns up it's natural and he treats Batgirl with friendship and respect. It is admittedly a little silly to watch Jim Gordon have conversations with Batgirl and not recognise his own daughter, but that's part of the ludicrous set-up of superhero comics I suppose. It's great to see the art show Black Canary as a muscular, powerful woman, for example, and not like a porn star or supermodel. This is a book that is treating its characters with intelligence and respect. This is a brilliantly written, well-paced and nicely illustrated superhero team-up book and is rapidly positioning itself as one of the absolute best books of the DC Rebirth initiative. (5/5)

Doctor Who: Supremacy of the Cybermen #3

Three issues in and Supremacy of the Cybermen has shifted from a bonkers but generally pleasing stacks-on of old monsters and continuity references, and slid into a tedious and unenjoyable mess. Nothing really happens here. There is a little bit of activity for the 12th Doctor, but scenes of the 9th, 10th and 11th all just spin their wheels madly and contribute very little. After the amiable but ultimately underwhelming three-Doctor crossover last year, I'm beginning to think that Titan's Doctor Who events are best left safely on the shelf. (2/5)

Sales of Gotham Academy never really set the world on fire, although it did provide some fertile ground for developing new characters and added a solid all-ages title to the Batman range. That in mind, it's perhaps not a surprise to see DC give the series a second chance with this soft relaunch. With the rest of the cast away on mid-year break, Olive is stuck alone at Gotham Academy - until she unexpectedly gets an aggressive and unwanted new roommate named Amy. While the general story of the issue is enjoyable as always, I actually had a pretty hard time with Amy. She's an actively unlikeable character, and if she's going to stick around in future issues there needs to be some effort made to warm her up to both Olive and the readers. If you've read the earlier volume of Gotham Academy, this issue offers more of the same. If you've never read Gotham Academy it's worth checking out: it's a bright and breezy school adventure with some pretty funny and entertaining characters. (3/5)
Posted by Grant at 10:42 PM