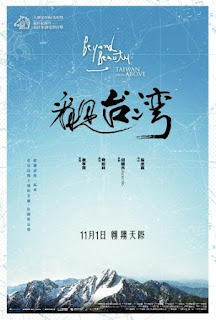 There seems to be a specific sub-genre of documentary film dedicated to rolling aerial vistas of landscapes. Slow drifting shots of mountains and fields, crashing oceans, lush forests, and so on. They are usually edited together with rich musical scores, often-times ones based around world music. These films can be quite pretty to watch, but also relatively hollow and vacuous.

In a few months I am travelling on a holiday to Taiwan, and seeing there was a documentary feature titled Beyond Beauty: Taiwan from Above I figured I could get a head start in seeing what parts of the Taiwanese landscape would be worth visiting myself. The film opens pretty much exactly how one would expect it to: beautiful vistas of Taiwan's mountain ranges and thick forests. Lakes, rivers and waterfalls. Soporific orchestral music backs it as the helicopter-mounted camera captures the idyllic landscape, and a soothing voiceover waxing lyrical about the beauty of the natural world. Yes?

About ten minutes in, Beyond Beauty abruptly pulls the rug out from underneath its audience. See this staggeringly beautiful forest? Surprise! It is being torn down to squeeze in tea crops for the fashionable urban elite. See this attractive river? It is getting destroyed by industrial factories pumping untreated chemicals straight into it. Ecosystems are dead. The coastline is destroyed. The world's single-largest emitter of carbon dioxide is a massive mega-power station, whose coal fires billow ash into the air every day of the year.

There is a vaguely unpleasant rhythm to Beyond Beauty, in that it constantly showcases something beautiful and then showcases how the Taiwanese people have destroyed it. The voiceover, by film director Wu Nien-jen, constantly chastises its target audience. It asks how they could stand for it. It demands to know how they let it happen. A last-minute sequence shows off some promising ecological recoveries, but altogether this is a depressing and accusatory picture.

As a documentary it is rather repetitive and dreary, but as a political statement it is wonderfully effective. Director Chi Po-lin took three years to shoot the film, and it feels soaked in his anger and disgust. It is, I suspect, impossible for most viewers to avoid getting sucked in by his rage. There has been some terrible damage done to Taiwan's environment, and even if we are not Taiwanese ourselves we know that similar damage is being done in our own countries all around the world. It is not a tremendously fun film, but it feels like an important one. It is absolutely worth tracking down and watching.

One particular highlight is Ricky Ho's emotive and sweeping orchestral score. There is more than a hint of Joe Hisaishi about it, and it backs the smooth photography perfectly. This was a huge hit upon release in Taiwan, and to be honest it is easy to see why.
Posted by Grant at 8:44 AM